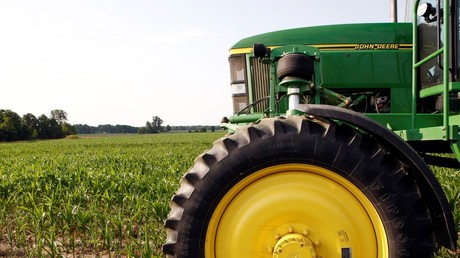 Trained canines had to be used to stop a joyrider who had led Denver authorities on what could only be described as one of the slowest police chases in recent memory.

The incident in an area of downtown Denver resulted in damage to several vehicles and properties after a man drove a John Deere tractor erratically down streets and onto a sidewalk, according to WEWS.

#BREAKING PIO is present at 15th and Market St for a briefing in regard to veh pursuit. #DPD

At one stage, the tractor veers onto the sidewalk in an effort to escape the authorities, with a person filming from a building above exclaiming: “It’s so crazy.”

The chase finally ended when an officer used his car to ram the slowly rampaging tractor. According to the Denver Post, police dogs and a stun gun were also used to apprehend the suspect, who had driven the tractor into a number of parked cars.

Intersection of 15 & Market where a tractor stolen near City Park ended up. Police are investigating it separately & have not said if it’s tied to 2 incidents earlier in the evening. pic.twitter.com/xNW0gwSvXY

The driver received a number of dog bites, and two officers were also taken to hospital after sustaining non-life threatening injuries.