Former presidential candidate Ralph Nader has fired back at Democratic Party critics, the Hillary Clinton campaign, and a Washington Post columnist for trotting out a 16-year-old argument that the legendary consumer advocate “spoiled” the 2000 election, prompting George W. Bush to be “elected.”

In a letter to the editor of the Washington Post (WaPo), printed very late on the Friday before Labor Day Weekend (when relatively few people would have been likely to read it), Nader responded to “one the most extreme ideologues in the business,” WaPo columnist Dana Milbank, who wrote a piece “From Jill Stein, disturbing echoes of Ralph Nader” late last month about the current and former Green Party candidates.

Ask most centrist Democrats, and they’ll tell you that Ralph Nader is responsible for the Bush presidency, the illegal invasion of Iraq, and the global financial crash in 2008, rather than blame Hillary Clinton, even though she voted for the invasion and backed her husband’s deregulation of Wall Street.

In the 2000 election, Democratic nominee Al Gore “lost” to Bush after the US Supreme Court ruled in Bush v. Gore, “a classic example of judicial overreach,” according to judicial advocacy group, Alliance For Justice.

“The Supreme Court never should have granted review of the case, as it was a matter of state law that typically would be – and should have been – left to the state Supreme Court,” their website noted in “Justice [Sandra Day] O’Connor has second thoughts about Bush v. Gore,” in which they quote her doubts in 2013 expressed to the Chicago Tribune editorial board. 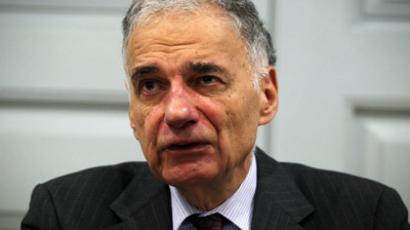 “Obviously the court did reach a decision and thought it had to reach a decision,” she said. “It turned out the election authorities in Florida hadn’t done a real good job there and kind of messed it up. And probably the Supreme Court added to the problem at the end of the day,” she said.

Nader ran as a Green Party candidate calling for campaign finance reform, single-payer healthcare, and environmental protections. He appeared on the ballot in 43 states plus the District of Columbia and won 2.74 percent of the popular vote.

In Florida, Bush beat Gore by a mere 537 votes. Nader had 97,421 votes, which led to accusations that he had “stolen” votes meant for Gore. A controversial Supreme Court ruling halted the recounts that appeared to be moving in Gore’s favor, giving Bush the electoral votes he needed to become president.

However, a 2002 Progressive Review report found pre-election polling and election day voting showed voters moving between Bush and Gore and not Nader. Over 300,000 registered Democrats also voted for Bush in Florida. Gore also lost in his home state of Tennessee.

“No country in the Western world places more obstacles to third party and independent candidates getting on the ballot than the United States,” Nader recently wrote in the Washington Post.

The so-called “Nader effect” is used to create fear in voters so they only see the Democratic candidate as the only option against a greater evil.

“Everyone has an equal right to run for public office,” Nader said. “What kind of twisted logic insists that smaller-party competitors should forfeit their First Amendment rights to speak, petition and assemble freely?”

The myth re-intensified across 2016, after years of simmering, given the fear-mongering over the ‘alt right’ billionaire businessman running against the Democrats’ millionaire lawyer.

The surprise-but-ultimately-unsuccessful surge of Vermont Senator Bernie Sanders in the primary left a vacuum after the convention in July, giving Stein an opening with millions of progressive voters, who accused Clinton and the Democratic National Committee of spoiling the system by “rigging” it against their candidate.