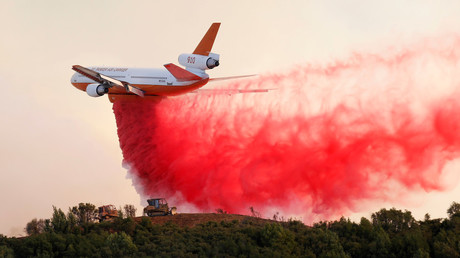 The raging Mendocino Complex fire has officially become the largest wildfire in California’s history, authorities have confirmed. Firefighters continue to battle the blaze, which is currently only 30 percent contained.

“We broke the record,” state Department of Forestry and Fire Protection spokesman Scott McLean said. “That’s one of those records you don’t want to see.”

The Ranch and River fires that make up the Mendocino Complex wildfire had grown to 283,800 acres by Monday evening, Cal Fire said in their latest update. Some 3,908 firefighters, 441 fire engines, and 15 aircraft continue to battle the flames.

MB Firefighters are still on the fire lines at the #MendocinoComplex as part of our local OES SLO County Strike Team. Our Strike Team is on their 12th day & MB provided structure defense on Scott’s Valley Road yesterday with great results. California #MutualAid works. pic.twitter.com/ANN6VlTrxt

While no casualties have yet been reported, the fires which have been raging throughout Northern California since July 27, have already destroyed 75 residences and are currently threatening another 11,300 structures. With mandatory evacuations in place in parts of Mendocino and Lake Counties authorities warn that only 30 percent of the blaze has been contained so far.