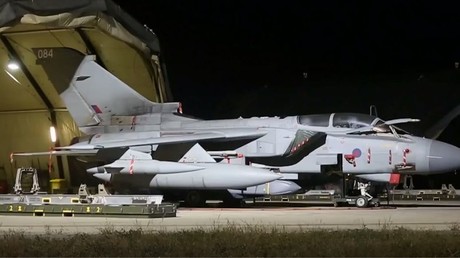 Footage from a Royal Air Force base in Norfolk, England has revealed ground crew preparing fighter jets to join strikes in Syria, which were carried out by French, US, and British forces overnight.

The images show RAF aircraft being fueled and organized for takeoff at the squadron’s main base near the village of Marham after UK Prime Minister Theresa May greenlit airstrikes in Syria.

READ MORE: 5 things you should know about US-led ‘one-time’ strikes on Syria

The aircraft used in the strikes were reportedly launched from an RAF base in Akrotiri, Cyprus. Each Tornado GR4 jet used missiles known as Storm Shadow. The long-range weapon can carry a 450kg charge at a range of around 300 kilometers.

Saturday’s air raid, which was carried out at 2am GMT, is in response to a reported chemical attack in Douma allegedly carried out by the Syrian military on its own people. The Syrian government has denied such an attack took place, and described the US, UK, and France airstrikes as a “violation of international law.” An on-the-ground investigation into the alleged attack is due to be launched by the UN’s chemical weapons watchdog, the Organisation for the Prohibition of Chemical Weapons (OPCW), on Saturday.

According to the British Ministry of Defence, the Syrian military base targeted on Saturday is located 15 miles outside the city of Homs. UK Defence Secretary Gavin Williamson described the early morning strikes as “legal and proportionate military force.”

“The reprehensible use of chemical weapons in Douma is further evidence of the Syrian regime’s appalling cruelty against its own people. We will not stand by whilst innocent civilians, including women and children, are killed and made to suffer,” Williamson said.

The Russian Ambassador to the US warned of “consequences” over the airstrikes.