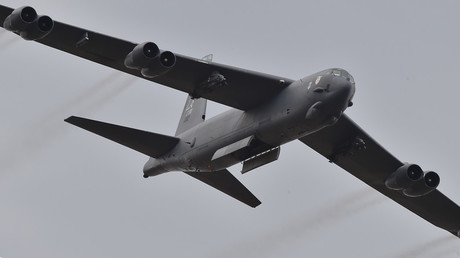 A radio enthusiast has recorded what is said to be a coded message directing a B-52 strategic bomber to launch a nuclear attack off the US Pacific coast. The nightmare scenario was part of the drills simulating nuclear warfare.

The dialogue was intercepted on Tuesday by radio and Boeing aircraft enthusiast Matt Cawby. It appears to be one of the so-called Emergency Action Messages (EAMs) used to initiate nuclear attacks, Tyler Rogoway, editor of military aviation-themed blog The War Zone, writes.

The exchange between the B-52 pilot, codenamed ‘Doom 61’ in the drill, and an operator on the ground, was posted by Cawby on Twitter. The message itself is relayed via NATO phonetic alphabet. The bomber was flying off the coast of Washington and Oregon when it was intercepted by the aviation enthusiast, according to Rogoway.

The EAMs direct the nuclear forces to unleash pre-planned nuclear strikes. Rogoway explains that “in order for that deterrent to work, enemies need to know that the command and control infrastructure that controls the arsenal is totally reliable and can act with sudden efficiency. Hence the display of force and the radio transmissions from last evening.”

The B-52s, along with B-2 stealth bombers, comprise the ‘air leg’ of the US nuclear triad. The other two ‘legs’ are the ballistic missile submarines and silo-based ICBMs.

Last August, the Pentagon awarded Lockheed Martin Corporation and Raytheon Company a $900-million contract each for manufacturing nuclear-tipped cruise missiles for B-52s. “This weapon will modernize the air-based leg of the nuclear triad,” said Air Force Secretary Heather Wilson said in a statement. The new missiles are expected to be fielded by 2030.

However, recent reports also indicated that the bombers may also be fitted with wing pylons able to support MOAB, the most powerful non-nuclear US bomb.