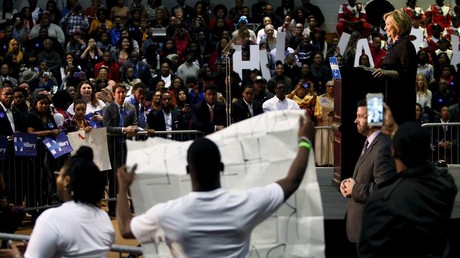 Russians specifically targeted African-American voters in 2016 in order to suppress their turnout and help Donald Trump win the US presidency, claim two controversial reports written for the US Senate by US and UK researchers.

Though described as “Senate reports” by mainstream US media outlets, the two documents were actually compiled by third parties. The first was produced by a consultancy called New Knowledge, with the help of two other researchers, while the second was done by a group at Oxford University and the UK research firm Graphika.

By the social media giants’ own admission, the criteria for labeling posts as “Russian” is so broad as to be practically meaningless. That hasn’t stopped the authors of the two reports, though, who saw President Vladimir Putin’s fingerprints on every keyboard and under every bed. In particular, they argued, the “Russians” sought to depress the 2016 turnout by targeting Black Americans.


Both groups relied on posts provided to the US government by Twitter, Facebook and Google and identified as coming from the St. Petersburg-based Internet Research Agency (IRA), also known as the “troll factory.”

“These campaigns pushed a message that the best way to advance the cause of the African-American community was to boycott the election and focus on other issues instead,” said the Oxford report.

“The most prolific IRA efforts on Facebook and Instagram specifically targeted black American communities and appear to have been focused on developing black audiences and recruiting black Americans as assets,” says the New Knowledge report.

While some African-American activists saw the reports as recognition of their community’s influence in US politics, others pointed out that blaming the “Russians” downplayed very real and long-standing racism in American society.

Reports show that Russians targeted African-Americans online during the 2016 election & caused a low Black voter turnout. The Black vote was low because Trump ran on an open white supremacist campaign, and the Democrats chose to maintain the Benign Neglect policy against Blacks

Russians used racial division to divide us further. Goes to show what the world sees when it looks at America. Also, shows the power of the black community. So strong that there are full campaigns both inside AND outside the country to suppress our voice. https://t.co/SNLIfg02sv

Black voters don’t need Russians to tell us about the Dems or the GOP. We’re well acquainted with how both parties have failed to address issues germane to our community. They targeted Black voters because rhey knew we’ve been neglected by both sides. https://t.co/lhTjxiqbIz

Contempt? Why would you have contempt? We Black folks need our “Great White Saviours” to save us from the propaganda of the scary Russians. Makes me definitely want to vote for the Democrats next election with their juvenilzation of Black people. No contempt at all.

The New Knowledge report says that 30 of the 81 Facebook pages created by the IRA targeted African-American audiences, attracting 1.2 million followers – slightly less than the 1.4 million followers of 25 pages appealing to Republicans.

Both mainstream media journalists and “Russiagate” conspiracy pushers cited the two reports as vindication of their work since 2016.

The Russians set up 30 Facebook pages targeting the black community and 10 Youtube channels that posted 571 videos related to police violence against African-Americans. YouTube was wrong when it said last year that Russian content did not target a segment of U.S. society.

The fact that Russians incorporated voter suppression aimed at African Americans into their attack on our election has been known but not as emphasized in the coverage. But it turns out to have been particularly aggressive. pic.twitter.com/tc6gKTCXji

There has been some skepticism, however, about the reports’ methodology and the researchers’ own bias and sources of funding and direction. For example, New Knowledge describes itself as an outfit specializing in “disinformation defense.” Its co-founder and chief operations officer Ryan Fox – whose name is on the report – “spent 15 years at the NSA” and before that was a computer network operations (CNO) analyst for the US Army’s Joint Special Operation Command (JSOC).

Jonathon Morgan, the company’s CEO and co-founder, is a former State Department adviser on “digital counter-terrorism” who has written for the New York Times, NBC, NPR, Wired, CNN, The Guardian, and VICE.

An advance copy of the New Knowledge report was provided to the Times ahead of its publication on Monday. The Washington Post was given similar access to the Oxford report. Both publications had predicted an easy Clinton victory in 2016 and were caught by surprise by Trump’s triumph.

Of all the absolute mountains of propaganda produced every election cycle, we’re supposed to believe the minuscule fraction of Russian stuff (probably .000001% of total propaganda produced) was somehow decisive. No one has *ever* explained how that even remotely makes sense.

More than half of the tweets supposedly run by the IRA are in Russian. Only 36% are in English. The authors seem to really be grasping at straws here. pic.twitter.com/fF7wW75m9D

In propagating — as they are today — the notion that “Russian” social media posts swayed voters’ choices, liberal coastal types are showcasing
the elitist contempt & cluelessness that cost their preferred candidate critical votes, & will continue to do so unless they wake up.

There’s a long and despicable history of US elite denying African Americans agency like this. The black vote did, indeed, not show up for Hillary but SHE failed all on her own. And her utterly contemptible behavior in loss shows she is no leader. https://t.co/5YmXTKeqw2