The founder of the Proud Boys, Gavin McInnes, has said he is quitting the group “in all capacities” and “forever” a day after the FBI designated it “extremist.” McInnes blamed Democrats and the media for vilifying the group.

“I am officially disassociating myself from the Proud Boys, in all capacities, forever. I quit,” McInnes announced on Wednesday in a newly-released YouTube video

The co-founder of Vice Magazine has been making headlines as the de-facto leader of the pro-violence right-wing organization, which McInnes himself describes as “Western chauvinist.” McInnes took an active part in the group’s protest activities, showing up at rallies across the country, including the infamous Unite the Right rally in Charlottesville, that left three people dead. 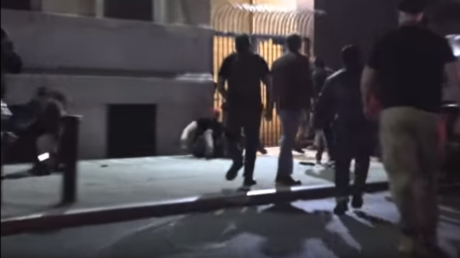 In his final appearance as the group’s public face, McInnes argued that he “was never the leader, only the founder” and that the term “stepping down” cannot apply to him.

Regarding his motivations for ditching the group, McInnes said that he was told by his lawyers that him disowning the group could help “alleviate sentencing” for nine members of the group who were arrested by the NYPD following a brawl with Antifa in October. The clash erupted outside the NYC Republican headquarters with both sides engaging in acts of violence. Three left-wing activists were subsequently arrested on misdemeanor assault charges.

McInnes said that, while he was following the lawyers’ advice, he was doing “all of this reluctantly,” blaming “terrible journalism, rumors and lies” for penetrating the court system and demonizing the group.

The Left needed to provide an example of a right-wing mob. In other words, the DNC needed the story, the Antifa happily did their bidding and the media was only too happy to get it out there.

Taking aim at establishment Democrats, McInnes argued that the real “crime” that triggered “this propaganda firestorm” was “mocking socialist Democrats.”

McInnes, who has previously sought to distance himself from white nationalism and the so-called alt-right, reiterated that the Proud Boys have no links to either white supremacism or nationalism, a notion which has been refuted by many of the group’s opponents. 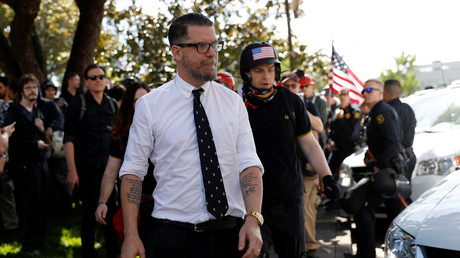 “This whole idea of white nationalism and white supremacy is a cruck. Why are we talking about this so much? Such people do not exist,” McInnes said.

Along with labeling the group extremist, the FBI gave warning about the group’s active recruitment efforts in the Pacific Northwest, accusing its members of fueling violence across the country, and in particular at college campuses.

McInnes slammed the FBI’s profiling, arguing that that the Proud Boys have “no agenda” and that “there is no recruitment.” He claimed that the group even had to deny membership to some applicants and has no intention to expand its base.

“We are not a gang,” McInnes said.

The Proud Boys were founded in 2016, and since then its black-clad members have become a frequent sight at right-wing events and marches. The Southern Poverty Law Center classifies them as a “hate group.”