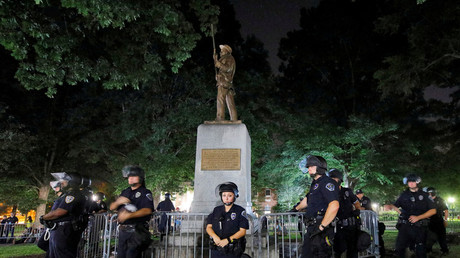 Activists have managed to topple the ‘Silent Sam’ statue of a Confederate soldier that has graced the University of North Carolina Chapel Hill campus for over a century.

The Silent Sam statue came down to the loud cheers of the crowd of around 300, who used ropes to topple the monument during the Monday night rally just before the school year begins on Tuesday.

Despite police attempt to intervene, the statue hit the ground by 9:20 pm local time. According to local media, one person was detained before charged with concealing a face during a public rally and resisting arrest.

“Tonight’s actions were dangerous, and we are very fortunate that no one was injured,” UNC said in a statement, noting that the incident is now being investigated for vandalism.

A controversial reminder of the city’s Confederate past, the Silent Sam memorial has been an eyesore to many left-wing Americans, following last year’s tragic events in Charlottesville, Virginia. While University officials took their time to evaluate the state law to determine if removal of the statue was possible, activists took the matters into their own hands.

The monument was erected in 1913 to honor the Confederate alumni who lost their lives in the American Civil War. Over the century since, Silent Sam has become an icon synonymous with racial oppression to many, seen in particular by African Americans in a negative light.