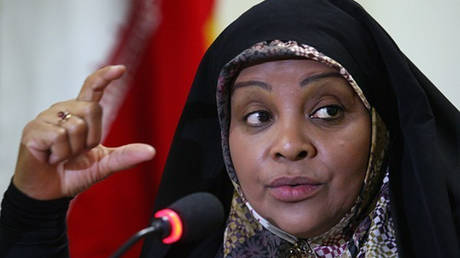 Protests have broken out outside UN offices in Tehran, as a US-born Iranian journalist prepares for an appearance before a grand jury in America. The demonstrators are demanding the release of the detainee.

A crowd gathered outside UN buildings in the Iranian capital on Wednesday, demanding the US release Marzieh Hashemi, a journalist with Iranian government media outlet Press TV. Among the crowd were journalists from the Islamic Republic of Iran Broadcasting (IRIB).

Hashemi was detained by FBI agents in St. Louis, Missouri, earlier this month, en route to Denver, Colorado, to visit family. Hashemi has been held as a material witness in an unspecified criminal case, and no charges have been filed against her.

The journalist claimed that her hijab “had been removed against her will” during custody, and that US officials denied her access to halal or vegan food for several days, leaving her with only pretzels and bread.

Also on rt.com
‘Mistreated in prison, family kept in the dark’ – ex-colleague of detained Iranian journalist to RT


“Our worry is that they use mental torture against her, without access to a public defender, and create a fake judicial case against her,” said Peyman Jebelli, director of IRIB’s World Service told Ruptly.

“It’s illegal, her detention is illegal, the way they treated her by pulling off her scarf – she is a Muslim woman – by putting her in chains, by giving her food she cannot eat,” said professor Foad Izadi.

Hashemi was born as Melanie Franklin in New Orleans, Louisiana. She converted to Islam in the wake of the 1979 Islamic Revolution in Iran, and changed her name when she moved to the country in 2008. Hashemi has become one of Press TV’s most recognized English-language news anchors.


According to a US federal court, she will be released when she testifies before “a grand jury investigating violations of US criminal law.” The FBI has not commented on the criminal case she is a witness in, but US law allows material witnesses to be detained until they have given their testimony.

Iran’s Foreign Ministry summoned the Swiss ambassador in Tehran to formally protest the arrest, as Iran and the US have had no formal diplomatic relations since 1980. Iranian Foreign Minister Javad Zarif accused US authorities of racism in their treatment of the journalist, who is African-American.

The US govt needs to explain how Marzieh Hashemi—a journalist and grandmother—is such a flight risk that she must be incarcerated until she finishes her testimony to a grand jury. 50 years after MLK assassination, US still violates the civil rights of black men and women.

“50 years after MLK assassination, US still violates the civil rights of black men and women,” Zarif tweeted on Monday.