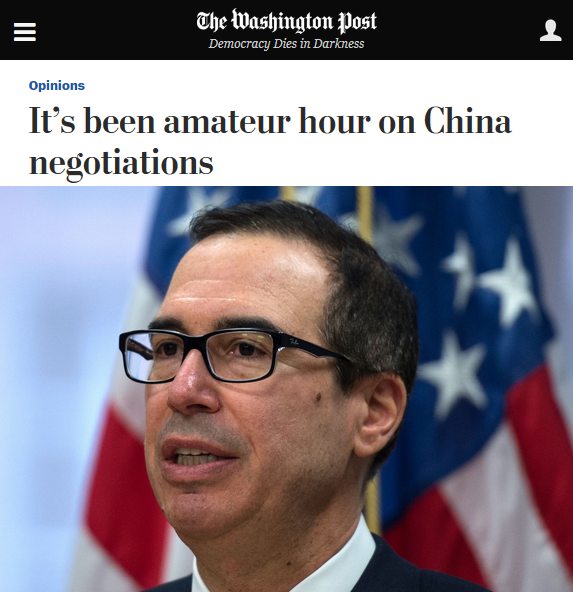 To Catherine Rampell (Washington Post, 5/21/18), the idea that the US’s $337 billion trade deficit with China is problematic is a “fairy tale.”

It’s rare that you get a more explicitly classist piece in a major newspaper than Catherine Rampell’s column (Washington Post,  5/21/18) on Donald Trump’s trade war with China. While its assessment of the Trump administration’s blustery rhetoric and confused actions seems very much on the money, its assertions about the country’s actual interests are not.

So rather than taking the time to learn about our actual complaints regarding China’s trade policy (primarily, intellectual property theft), or how we could deal with them (through multilateral pressure, such as the Trans-Pacific Partnership that Trump killed), Trump fixated on deficits. The part of the story that sold with the public.

OK, so Rampell tells us that we should not be concerned about a trade deficit that costs in the neighborhood of 2 million manufacturing jobs. Instead, we should be concerned that China is not as protectionist as she wants it to be when it comes to the intellectual property claims of our software and pharmaceutical companies.

And why exactly should those of us who don’t own lots of stock in Microsoft and Pfizer care if China doesn’t pay them licensing fees and royalties? If we think through the economics here, this means that other things being equal, lower payments to these companies mean a lower-valued dollar, which would improve our trade balance on manufactured goods. What’s the problem here?

Actually, the story gets even better. Suppose that China doesn’t honor the patents of Pfizer and other drug companies, so that it produces generic version of new drugs that sell for hundreds of dollars for a course of treatment, instead of the hundreds of thousands of dollars that these companies demand for the patent-protected product (equivalent to tariffs of tens of thousands of percent). Suppose it sells these generic versions to people in the United States, or just lets them come to China for their treatment.

This would save patients in the United States enormous amounts of money, and possibly save lives. This is what free trade is all about.

Sure, it means that Microsoft and Pfizer will not be as profitable, and their shareholders will be less rich. It probably also means that some of the highly skilled workers whose pay depends largely on these forms of protectionism will get smaller paychecks. But as I recall, we are all supposed to be concerned about income inequality, so why should the country be pursuing a trade policy intended to give us more of it?

Yes, we do need a mechanism for financing innovation and research. But we can do better than extending a relics of the feudal guild system, even if most of the folks in policy debates are too lazy to bother thinking about the issue. (See my book Rigged, chapter 5. It’s free.)

Dean Baker is senior economist at the Center for Economic and Policy Research in Washington, DC. A version of this post originally appeared on CEPR’s blog Beat the Press (5/21/18).