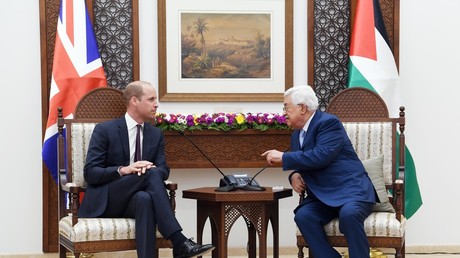 Having being told to bring a “message of peace from Israel” by Prime Minister Netanyahu, the Duke of Cambridge crossed into the Occupied Palestinian Territories (OPT) today for a Royal Family first.

Rolling into Ramallah, Prince William met Palestinian Authority President Mahmoud Abbas for the most political non-political meeting ever, followed by lunch. Later, he will speak at a reception at the British Consulate in East Jerusalem, attended by “a broad range of people from across the occupied Palestinian territories“.

The historic meeting with Abbas was beamed out on Twitter by Kensington Palace, the official account for the Prince, his brother, and their wives. Like with everything related to Israel and Palestine, reaction has been a mixed bag:

There’s been praise for how the Prince has conducted himself throughout the trip, with others reminding us of where he got his manners from

Good Luck to Prince William on his last part of the tour! He’s been doing great so far, and I hope he does even greater. Hope his visit to Palestine will change their situations, In Sha Allah. 😊

Prince William is a scrupulously honest prince and what he said is the absolute truth. May God bless Prince.

Despite a “message of peace” being delivered from Tel Aviv, others have used the opportunity to drop the “terrorism” word and post propaganda, despite missing the irony of Israel’s own violent history.

Some got straight down to the real issue of the day, demanding the release of jailed ex-EDL leader Tommy Robinson.

Wouldn’t it be nice to #freetommy instead of talking with terroristic leaders?

More level headed commentators reported on the potential for peace from the meeting, while others noticed a difference between President Trump’s motorcade to the White House and the one William took to allegedly one of the most dangerous places in the world.

Prince William in Palestine today. Compare his motorcade in allegedly one of the most dangerous places in the world…to Donald Trump just on his way to the White House. Madness! pic.twitter.com/TsEBKD5LVe