I will join with many of the other reviewers and say that this book is a must read for anyone who has any type of self-defense weapon on their person or in their home. After reading the book, I’ve come to the sober conclusion that the law doesn’t seem to favor the ordinary person who is simply trying to defend themselves. In order to prevail, it would seem that each person needs to have a law degree from Harvard, and the ability to slow down time in the event of lethal force situation. This is the case because the legal system, chops up your deadly force encounter, which is measured in seconds, into an esoteric academic exercise where the actions of the parties are scrutinized at the the nano-second level. One can almost imagine a panel of ancient philosophers, psychologists, and scholars evaluating who is in the right and who is in the wrong at any given fraction of a second in the timeline of events. In our system of justice, such reflection is done by the police, the DA’s office, your defense attorney, and a jury of your peers — folks who know nothing about the law.

The author presents a very sobering view of how the legal system works for those who choose to defend themselves in a violent encounter. Yes, you may have killed the bad guy, and you may feel that you are right, but if the legal system choses to pursue your actions, you will have two outcomes; the price tag of your legal defense and your freedom, or, 20 years to life in prison. On several occasions, while reading, I thought that death or serious bodily injury might actually be a good option given the real possibility of jail for the rest of my life, a fate that might be assigned by a gun hostile jury or some real error I made in the deadly encounter. 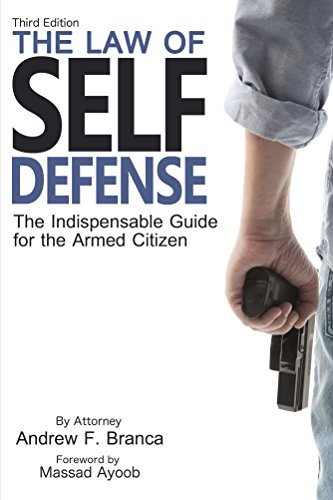