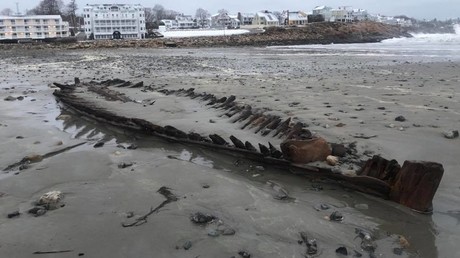 The “bomb cyclone” that battered the north-east of the United States in the past week was not the proverbial ill wind. It blasted away enough sand to reveal the wreckage of a ship that dates back to the 1700s.

Huge waves dredged up what remains of the historic ship at Short Sands Beach in York, Maine. The city’s police department shared photos of the wreck on its Facebook page. “Every once in a while after a storm the ocean moves enough sand for it to be seen,” the police wrote.

Historian Sharon Cummins writes in local website Seacoast Online that the wreck was first seen in 1958, but it was quickly swallowed again by the sands. It reappears occasionally after particularly strong storms.

Archaeologist Leith Smith said the 15-meter-long and four-meter-wide ship is believed to be a coastal trading vessel that was used between 1750 and 1850. “It was the 18-wheeler of the day,” Smith told CNN.

New research indicates that the wreckage may have been from a ship called the ‘Industry,’ which set sail in 1769. “It was probably driven on shore by a storm and pushed so far on the sand that they couldn’t refloat it,” he said.

The Maine Historic Preservation Commission researcher plans to do more testing on the wreck before it is once again reclaimed by the sands of time.