After repeated accusations of inaction, Portland’s mayor has proposed new measures to separate brawling protesters. Across the nation, cities are struggling to handle violent protests, as America’s political divide widens.

Mayor Ted Wheeler, a Democrat, proposed emergency ordinance on Monday afternoon that would allow police to separate rival groups of protesters, and corral any protesters with a history of violence into a designated space, under extra police supervision.

“I will not allow continued, planned street violence between rival factions to take place in Portland, Oregon,” Mayor Wheeler told a press conference on Monday. The mayor’s comments came two days after left-wing Antifa activists brawled with right-wing Proud Boys and Patriot Prayer demonstrators, with protesters deploying pepper spray and beating each other bloody. Several injuries were reported, but police made no arrests.

Saturday’s rally was organized by the right-wing groups to protest Mayor Wheeler’s hands-off approach to a rally one week earlier. That earlier rally saw Black Lives Matter and other left-leaning activists block traffic in the city. One elderly motorist, who tried to drive past the barricades, was physically assaulted and had his car battered with clubs and batons by the protesters. Police stood by a block away and declined to intervene, with the Portland Police Bureau telling the Wall Street Journal that they didn’t want to risk “changing the demeanor of the crowd for the worse.”

unfiltered.politics #Portland#Antifa takes over the streets as cops stand down while senior citizens get harassed, called white supremacists, and their cars get vandalized. What the hell is going on in Portland? Leftists have totally and completely lost their minds. #VoteRedpic.twitter.com/9dTJshpDEO

This month’s confrontations were not isolated incidents. Portland has become a flashpoint for violent rumbles between the left and right. Antifa protesters stormed City Hall and attacked security officers in August, after another Patriot Prayer rally. Riots broke out at rival Proud Boys/Antifa protests in July. A similar gathering in June left one protester sitting in hospital with a fractured skull and a brain hemorrhage.

At every clash, police have been accused of failing to do enough to separate the groups. Mayor Wheeler has also been accused of siding with the left, as was the case when a sprawling ‘Occupy ICE’ camp was allowed to fester in the streets for five weeks this summer, before police eventually cleared it out. Wheeler said at the time that Immigrations and Customs Enforcement was an agency “on the wrong track,” and said he would not deploy officers to “bailout” the agency, even as protesters surrounded its office and threatened employees.

The National ICE Council claimed that Wheeler’s refusal to step in amounted to violation of the 14th Amendment to the US Constitution, which requires providing all US citizens equal protection of the laws. “Your policy has created a zone of terror and lawlessness,” read a letter from the Council to Wheeler.

The rising tide of street violence is not native to Portland. Last year saw similar confrontations in Virginia, Michigan, California, Arizona, Massachusetts and Washington, with the deadly ‘Unite the Right’ rally in Charlottesville, Virginia, violently ramming home the division in American society. White Supremacist Jason Alex Field’s vehicular rampage has not been emulated since, but government and law enforcement is still struggling to maintain law and order at street protests, which are protected by the First Amendment, but frequently devolve into block-long rampages. 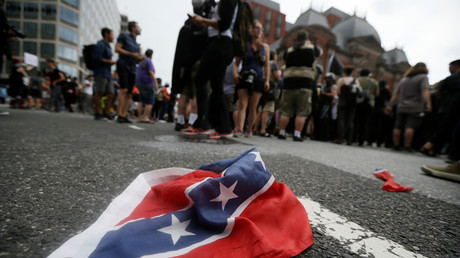 Police in the capital have been proactive in separating rival demonstrators, however, and kept this year’s ‘Unite the Right 2’ rally largely under control, despite the best efforts of some of Antifa’s finest. A right-wing protest organized by White Supremacist Jason Kessler was set to descend on the National Mall, but drew a dismal crowd and passed off without incident, in sharp contrast to the previous year’s gathering.

Many street protests, particularly in southern states, have stemmed from the planned removal of Confederate statues, which the left says honor a history of racism and slavery. Now, 150 years later, Congressman Steve King (R-Iowa) has warned that the US is lurching towards a second Civil War. University of Tennessee Law Professor Glenn Harlan Reynolds argued in a USA Today column that this new war is already “well underway,” while political scientist Thomas Schaller wrote that America is “at the beginning of a soft civil war.”

Whether street brawls in Portland and beyond are a foreshock or the opening salvo, plenty of Americans agree. According to a Rasmussen poll, 31 percent of likely US voters say it’s “likely” that the United States will descend into civil conflict in the next five years.