US Secretary of State Mike Pompeo has blamed Iran for “perpetuating” the 7-year Syrian war, causing a refugee crisis and provoking terrorist attacks in Europe, by supporting the “murderous Assad regime.” Is he correct?

The accusations came as part of Pompeo’s 12-point ultimatum to the Islamic Republic delivered on Monday, in which the newly-appointed official slammed its “financing of terror” and “destabilizing activities.” But does Washington have the moral authority to accuse Tehran of malign meddling, and has its own influence brought more peace? Syria is a good test case.

.@SecPompeo: #IRGC has cont. to pump thousands of fighters into Syria to prop up the murderous Assad regime…Iran perpetuates a conflict that has displaced more than 6 million Syrians inside the country and over 5 million to seek refuge outside its borders. #PompeoatHeritagepic.twitter.com/Iokl0LcrJv

Who has a better excuse to be in Syria?

Iran has been a long-time ally of Damascus and is in Syria legally at the behest of President Bashar Assad, who – whatever the opinion of his time in office – is the internationally recognized leader of his country. By itself, Tehran’s involvement in Syria is on the right side of international law.

The US, on the other hand, has been described as an “illegal invader” by Assad himself. Washington has funded efforts to topple the government since 2011, and has stationed troops in Syria since 2015. The US is not a neighboring country directly affected by the conflict and does not have an international mandate, other than as a leader of an intervention coalition it has assembled itself.

“Those who entered Syria without the permission of the Syrian government are the ones that must leave the country,” Iran said pointedly on Monday evening.

Which factions have they been supporting?

Washington has defended its intervention on humanitarian and moral grounds, saying that it has been helping the “good guys” and those facing persecution. Unfortunately, Americans have found it difficult to attach themselves to a respectable faction. The initial pro-democracy protests were short-lived, the “moderate” rebels of the Free Syrian Army were always a relatively paltry proportion of the anti-Assad coalition, and in any case appear to have been hijacked by religious hardliners. 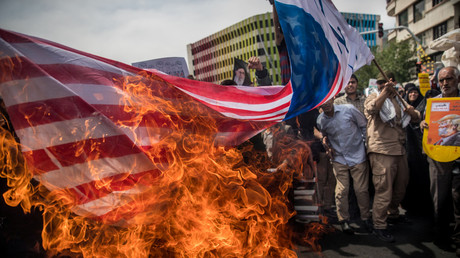 In the recent stand-off in Eastern Ghouta, the rebels the US was endorsing reportedly included Tahrir al-Sham, the local branch of Al-Qaeda, and the Salafist jihadis of Nour al-Din al-Zenki Movement. This is neither a secret nor an isolated case, with many instances of US backing or protecting Al Nusra branches from Russian or Syrian forces. Perhaps America’s most honorable partners were the Kurds, but they have their own self-interest in Syria, and in any case were swiftly “let go” by the US once they served their purpose of defeating Islamic State.

In contrast, Iran has consistently supported one side in the conflict. While the Syrian War has undoubtedly been brutal, few even in the Pentagon would argue that the treatment of civilians in government-controlled areas is comparable to the Shariah-dominated mini-theocracies or anarchic free-for-alls that many rebel areas became. Perhaps systematic use of chemical weapons could level the score, but this remains a highly contested charge against government forces, and definitely no Iranian initiative.

Which side is more responsible for ‘foreign fighters’ in Europe?

This is the flimsiest of Pompeo’s claims. The Syria-hardened terrorists who “have crossed into Europe and threatened terrorist attacks” in the past years are not Iran-loving Shias, but their Sunni rivals, inspired by the religious side of the struggle in the country fanned by the Pentagon.

The US secretary of state said that this may have been the result of them becoming refugees, but surely it is untenable to blame just one side for creating refugees in this conflict. Nor would Pompeo have praised Iran and Syria for killing more fleeing radical Islamists, just to prevent them from committing acts of terror in Europe later. Possibly a glance in the direction of Iran’s regional rival Saudi Arabia would be more apt here, if any specific party is to be blamed.

So which side actually did “help make that country 71,000 square miles of kill zone” and “displaced more than six million Syrians inside the country and caused over five million to seek refuge outside of its borders,” in Pompeo’s words? 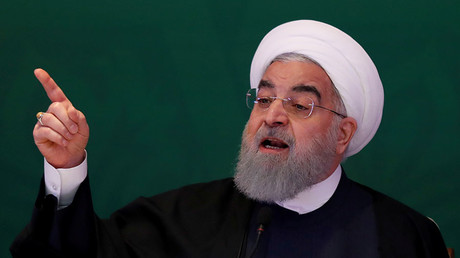 No one even knows how many people have been killed in Syria since 2011, with the UN merely referring to “hundreds of thousands” after it admitted it could no longer verifiably estimate the death toll in 2014. Thus it is impossible to speak of an exact kill count on different sides, or the circumstances that made each turn to violence.

But once it became clear, a couple of years into the conflict, that the US was supporting primarily radical forces who were unlikely to ever establish peace, once Washington said that it would never accept any circumstance for Assad to stay on, and once the balance of power tipped irrevocably to government forces, it is the US that bears ever-greater responsibility for the continuing bloodbath.

Backing uncompromising forces, setting a priori impossible conditions (something it has arguably done again with Iran) and chasing lost causes, the US has painfully stretched out the war, without any clear objectives – unlike Iran, which is fighting towards a clear resolution.