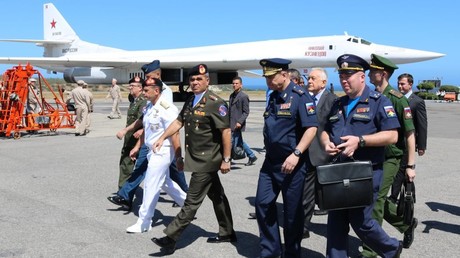 A tweet posted by US Secretary of State Mike Pompeo condemning the landing of two Russian bombers in Venezuela as a “squandering” of public money, has quickly backfired, with many eager to point out some glaring hypocrisies.

Russia sent the two Tu-160 strategic bombers on the 10,000km trip to land at Simón Bolívar International Airport on Monday in a show of support for the government of President Nicolas Maduro, which has repeatedly expressed concerns that the US is trying to topple it.

#Russia‘s government has sent bombers halfway around the world to #Venezuela. The Russian and Venezuelan people should see this for what it is: two corrupt governments squandering public funds, and squelching liberty and freedom while their people suffer. pic.twitter.com/bCBGbGtaHT

Maduro on Sunday warned of an effort “directly coordinated from the White House to disturb democratic life in Venezuela” and a possible “coup” against the government.

Pompeo eagerly denounced Russia for sending the bombers “halfway around the world,” writing that it amounted to “two corrupt governments squandering public funds, and squelching liberty and freedom while their people suffer.”

But the responses to the tweet were probably not quite what Pompeo anticipated, with many noting that the US has been known to send its own bombers around the world without much consideration for national boundaries and international law.

🤔 Uncle Sam has military bases in every part of it’s empire. These bases are forced upon these nations. Russia is no defenceless country where you can kill, plunder, setup bases & uproot it’s people from their land.

#America‘s government has sent bombers halfway around the world to #Everywhere. The people of this planet should see this for what it is: one corrupt governments squandering public funds, and squelching liberty and freedom while their people suffer.

Let’s get this straight… sending military assets all over the world is a waste of public funds… We can quote you on this.

Right cuz we totally aren’t doing maneuvers across the globe

Others pointed out that the US not only sends its own bombers wherever it wants but actually has hundreds of bases for them all over the world.

I think it’s time now for Russia to establish a large military base on Cuba. With nuclear-capable missiles, purely for defence of course, just like those American missiles in Poland and Romania. And maybe also in Venezuela and Nicaragua. https://t.co/l1wMaQMV7o

Some noted the US’ support for the devastating Saudi-led bombing campaign in Yemen, suggesting that Pompeo had little credibility expressing concern for people’s suffering in other countries while Washington still supported such activities.

You still support the prince & Yemen War. You have zero credibility.

Others pointed out that the Russian military budget is actually very small in comparison to the $750 billion that US President Donald Trump has signed off on for 2020, despite increasingly unmanageable national debt and ongoing debate over the ability to afford public healthcare.

Squandering public funds? The Russian military budget is about 1/12th the US budget. Whose doing the squandering? Why are we in the South China Sea? Why are we still in Afghanistan?

Something very funny about the US (which spends more on its military than China, India, Japan, Russia & the entire EU put together) accusing other countries of “squandering public funds” on bomber plane flights. https://t.co/lk6CXunIWc

thats funny, considering all the troops and money we send around the world and yet we don’t have universal health care. Lost the moral arguement at that point…

The Kremlin itself was also quick to respond to the tweet, with spokesperson Dmitry Peskov noting that the US military budget “would be enough to support all of Africa.”