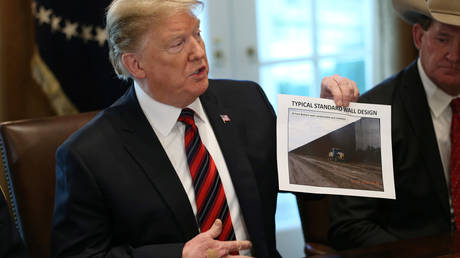 With no signs of compromise on the standoff over funding for a border wall, new polls found that after 34 days of government shutdown, Americans are growing tired of the deadlock and want an agreement reached as soon as possible.

Separate polls released this week found that more Americans feel the partial shutdown is a bigger emergency than the border situation and that the wall is not worth the standoff. In some bad news for Trump, more Americans also pinned the blame for the standoff on him than on congressional Democrats.

The latest poll, released on Thursday by the Associated Press and the NORC Center for Public Affairs Research, found that 60 percent of Americans said Trump bore a “great deal” of responsibility for the shutdown — and that the impasse has cut into his overall approval rating, which was at 34 percent, down from 40 percent in December.

Along party lines, however, things are more split, with both sides refusing to give in. Among Republicans, 65 percent said Trump should refuse any spending bill unless it includes funding for the wall, while 69 percent of Democrats said funding should continue to be refused.

Trump’s approval rating has dropped to 36% in a new CBS poll. 59% disapprove.

In more bad news for Trump, the CBS poll also found that overall House Speaker Nancy Pelosi is seen as doing a better job on negotiations than Trump, with 47 percent saying she was handling the situation better, while 35 percent felt Trump was doing a better job.

In a sign, however, that Americans overall are willing to support any kind of agreement to get the government fully running again, 66 percent said Trump should agree to a bill with no wall funding and 52 percent overall said that Democrats should agree to a deal which included wall funding.

Separately, a Fox News poll showed that 75 percent of people felt the shutdown was an “emergency” or “major problem” facing the country — higher than the 59 percent who said the border was a major issue.

Bad numbers for Trump in the Fox poll. People think the shutdown is a much bigger emergency than the border and his approval is down to 43 percent. Fox finds slippage among white evangelicals and voters describing themselves as very conservative. https://t.co/6TF1Y3s57fpic.twitter.com/FAPrFqEzxZ

Trump has demanded $5.7 billion in funding for the wall, which has been steadfastly opposed by Democrats, leading to the partial shutdown, which has reached its 34th day. For weeks, both sides have refused to budge on their positions, leading to a separate standoff over the State of the Union Speech which Trump was due to deliver to Congress next week.


As House speaker, Pelosi has the procedural right to call the president to deliver the speech, which she refused to do until the shutdown ends. After initially warning Pelosi that he would show up on Capitol Hill to deliver the speech anyway and accusing her of being “afraid of the truth,” Trump backed down and said he will give the address when the shutdown is over.