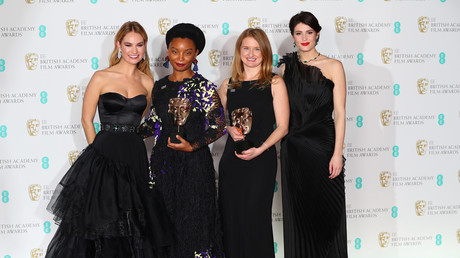 Awards season is upon us, so that means glitz, glamour and — increasingly — politics. The red carpet now channels Speaker’s Corner as celebs engage in a bit of soapboxing: Here are this year’s most politically-charged moments.

In a case of would she or wouldn’t she, all eyes were on the Duchess of Cambridge when she stepped out of her limo on Sunday. While that may usually be the case anyway, this time the focus was on the pregnant royal’s dress.

RT had previously reached out to Kensington Palace (to no avail) to find out whether Kate would be flouting the royal family’s usual rule of staying out of politics, or joining the ranks of black-dressed stars showing their support for Time’s Up.

Instead of standing out from the crowd in a bright color, Middleton sat firmly on the fence. Wearing a dark green dress and a black sash to the London event, she managed to keep her outfit muted without wholly committing to a political cause. One must wonder, however, if the black sash wasn’t a small sign of allegiance.

Anyway, the Duchess has since been derided on Twitter for failing to conform to the informal, black dress code.

How silly of us to expect the #DuchessofCambridge to perhaps be able to support anti-sexual harassment campaigns. Surely, the luxury of her pampered life allows her a few spare moments relate to the trials and tribulations of the average woman and ponder her measly contribution?

Quite a bummer to see that the Duchess of Cambridge didn’t wear black to the #BAFTAs and not a #TimesUp pin on either Cambridge.

There is nothing political about standing up to sexual assault. This should’ve been an easy choice for them to make, and they failed.

Though support did come from others, “Apparently, she’s not allowed to exercise her feminist right to wear whatever colour dress she chooses,” Piers Morgan observed on Twitter.

Duchess of Cambridge being abused by ‘feminists’ on Twitter for not wearing a black dress at tonight’s #BAFTAS.
Apparently, she’s not allowed to exercise HER feminist right to wear whatever colour dress she chooses. pic.twitter.com/dJrldJpBph

While most of the star-studded audience stood as one, sporting robes of black to demonstrate their allegiance to the campaign, Best Actress winner McDormand chose to wear a bright red-black-and-pink dress.

“Thank you, British film people,” she said on stage.

“As Martin [McDonagh] said, I have a little trouble with compliance,” she said, pointing to her dress.

“But I want you to know I stand in full solidarity with my sisters tonight in black. I also want to say that I appreciate a well-organized act of civil disobedience.”

She then took the chance to bring up how political campaigners had used her (now award-winning) film to inspire acts to further their own causes; like the three billboards demanding justice following the Grenfell Tower fire driven through London on Thursday.

“I’m thrilled that activists all over the world have been inspired by the set decoration of Three Billboards in Martin’s film and have taken to the streets and let it be a part of the positive public discourse that’s happening,” she said.

The Sisters Uncut activists were seen jumping onto the carpet as celebrities were arriving, wearing t-shirts declaring “Time’s Up Theresa.” While lying on the red carpet, they chanted “the DV Bill’s a cover-up, Theresa May your time is up.”

Gemma Arterton, who played one of the leading female activists in the West End musical ‘Made in Dagenham’ — the story of the 1968 Ford sewing machinists’ strike — decided to take a few of her muses along with her. Arterton was joined by former sewing machine operators Eileen Pullen and Gwen Davis, two of the 187 women who staged a three-week walk-out from Ford’s Dagenham plant in 1968. The women walked out after learning they were to be classified as unskilled workers, paid 15% less than their male coworkers.

Actresses Naomie Harris, Gemma Chan and Tessa Thompson were all also joined on the red carpet by activists.

Afua Hirsch came as a guest of British actress Naomie Harris. The Guardian journalist made headlines in 2017 when she suggested Admiral Nelson’s statue in Trafalgar Square should be taken down because he was a ‘white supremacist’ and that he spoke out in favor of slavery.

In turn, Laura Bates came as Chan’s guest. Bates launched the Everyday Sexism project in 2012, and has received death and rape threats because of her campaign work.

‘Thor: Ragnarok’ star Thompson was joined on the red carpet by Marai Larasi, executive director of Imkaan, a British black feminist organization. The group campaigns against violence towards black, minority ethnic and refugee women and girls.