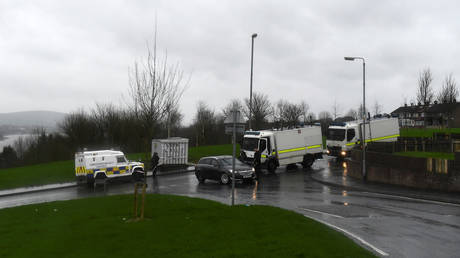 Rumors spread like wildfire as Derry, Northern Ireland, was hit by three security alerts on Monday. With panic setting in on social media the police are seeking to reassure people that a zombie apocalypse isn’t nigh.

The alerts were sparked after two vans were hijacked by masked men and a third was reported abandoned outside a girls’ secondary school. Numerous people had to evacuate their homes as the cops established security cordons around the vehicles.

A third security alert is underway in Derry tonight. An abandoned ASDA van has been left outside St Mary’s Secondary School blocking the road. Police cordon in place. pic.twitter.com/nLgGQxbuj4

Bomb disposal experts also carried out a controlled explosion in one of the vans after the suspects were seen throwing an object in the back of the vehicle before abandoning it.

Meanwhile, one man remains in custody in relation to a car bomb that exploded in the city on Saturday evening. Nobody was injured in the incident.


The city was the scene of numerous acts of politically motivated violence during the Troubles in Northern Ireland. With so many incidents occurring in such a short timeframe many feared that it was a return to the bad old days and ominous speculation was rife on social media.

With panic setting in, police name-checked US President Donald Trump while urging people to pay no heed to rumors and to listen to official information released by authorities.

“I don’t want to sound like #DonaldTrump but there is a lot of #FakeNews. I’m half expecting to read that the Zombie Apocalypse has just crested Sherrif’s Mount,” the Derry branch of the police service wrote on its official Twitter account.

There are tons of rumours circulating on other FB pages. I don’t want to sound like #DonaldTrump but there is a lot of #FakeNews. I’m half expecting to read that the Zombie Apocalypse has just crested Sherrif’s Mount. We’ll keep you posted on real events #KeepingPeopleSafe

‘Nothing to do with Brexit’

With tensions high in the region as the Brexit deadline draws close the UK’s Northern Ireland minister Karen Bradley said there was no link between the security alerts and the bombing and the ongoing Brexit discussions.

“Nobody should try and draw any connection between what happened on Saturday night and any of the discussions that we are having in this place or with our friends in Europe,” she told the UK parliament.

“These are plots and activities that these people have been working on and trying to carry out for many, many years and we need to be clear with them that those activities are not welcome … this has absolutely nothing to do with Brexit.”