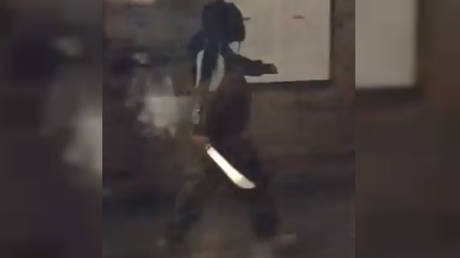 A machete-wielding man was tasered and arrested by a group of police officers as terrified commuters looked on in horror. Eyewitness footage captured the man’s arrest.

The armed, 59-year-old man was subdued by police, who deployed a taser to immobilise him on the platform at Tulse Hill station in South London at about 18:30 local time Monday. He was arrested on suspicion of attempted murder and possession of an offensive weapon.

In the video, terrified passengers can be heard screaming as the man walks along the platform, blade in hand. When police arrive, however, the armed man immediately puts his hands in the air, prior to being sent crashing to the ground via electric shock. Thankfully, no bystanders were injured in the incident.

Eyewitnesses reported that police seized multiple bags from the man, speculating that he may have been armed with more weapons, though police have yet to confirm whether this was indeed the case.

“This incident is not currently believed to be terror related,” the British Transport Police said in an official statement.