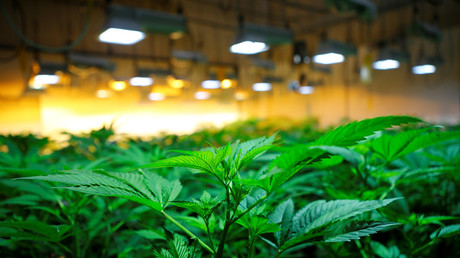 Police in West Yorkshire raided a large cannabis farm with a little help from the snow (or lack thereof) after officers noticed a home with a remarkably ice-free roof, despite blizzard conditions in the area.

Keighley police officers searched the property after noticing the suspicious absence of snow from a rooftop among a row of houses with white-blanketed tiles. Upon entering the empty property, they discovered 322 cannabis plants across four bedrooms and a cellar.

The two officers who made the growhouse find tweeted about it on their individual accounts, sharing photos from the scene. Police Constable (PC) Caroline Foster tweeted images of the plants noting that some were as high as 6 feet (1.8 meters) tall.

PC James Butterfield speculated the haul could be valued at up to £80,000. “So this is what we got up to! My size 10 boots came in handy for entry. Removing this filth from the streets is always great. Knowing that the morons responsible for it are £80k out of pocket is a Brucey bonus! #didntwedowell,” he said on Twitter, as cited by the Yorkshire Evening Post. Butterfield’s tweets are protected.

A police spokesperson confirmed the seizure near Arctic Street in Keighley, Thursday, stating that the lack of snow on the roof suggested a strong heat source which aroused suspicions, in addition to the strong smell of cannabis emanating from the property. The plants are now being examined and valued.

Meanwhile, the officers who made the raid have come under some criticism for tweeting out their work activities on their individual accounts. Netizens branded the bust as a waste of police resources and embarrassing.

Help me understand why individual police officers need their own Twitter? Surely as law enforcement you should be rising above ‘venting’ to your followers. All this does is cause arguments between people online and the police.

What a waste of police time and resources when you could actually be helping people. I thought you guys were under funded and struggling to cope?

Some time from now you’ll feel very embarrassed about how proud you currently feel by enforcing these dated laws. I just hope it sooner rather than later.

Their actions, however, have been defended by senior members of the force. They say the use of Twitter creates engagement between police and the local community.

Everyone is entitled to an opinion however we are answerable to the communities of Keighley. Our communities are telling us to tackle the menace of drugs. We are listening and acting. What better way to keep them updated than social media. #wyp_keighley#policingbradford