At least 26 people have been arrested across London as police launch a preemptive crackdown on drug, knife and gang crime prior to this weekend’s Notting Hill Carnival.

Eight properties were raided in Lewisham, southeast London, in the early hours of Tuesday morning, where officers seized what they believed to be Class A and B drugs. Eight people were arrested.

A further 18 people were arrested after raids on 21 homes in Kensington and Chelsea – where the Notting Hill Carnival is due to take place – Hammersmith and Fulham, Westminster and Wandsworth.

The 29 raids on Tuesday were carried out by more than 100 Metropolitan Police officers, with the assistance of British Transport Police (BTP) and City of London Police.

The arrests were predominantly for possession with intent to supply drugs.

The raids come as part of a wider crackdown on gang, gun and knife crime prior to the UK’s largest African-Caribbean event this August Bank Holiday, which will see at least 2 million people turn out.

Since August 11, officers have made more than 290 arrests, recovering 190 knives and 18 firearms. 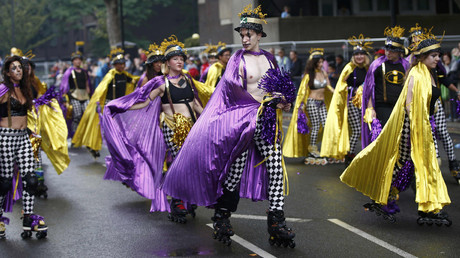 The force said those who are released on bail will not be allowed to attend the event.

Met Chief Superintendent Robyn Williams, the force’s spokesperson for the Notting Hill Carnival, said: “Our officers have been proactive and focused on tackling serious violence and knife crime across London.

“Today’s operation is aimed at ensuring that those who intend to cause trouble at carnival are prohibited from doing so.

“We are committed to ensuring that carnival remains a safe, vibrant and enjoyable event; troublemakers are not welcome. We will be uncompromising in our operations to keep our communities safe and secure.”

The force added there will be highly-skilled officers known as “super-recognizers” on duty at the carnival and in the CCTV control room.

They will be responsible for picking out faces from the crowd and spotting anyone banned from Europe’s largest street festival.

There were more than 450 arrests at last year’s carnival, the highest since 2010. Four people were seriously injured.

More than 1,000 participants were treated by emergency services, mostly in alcohol-related incidents. At least 74 were admitted to hospital.