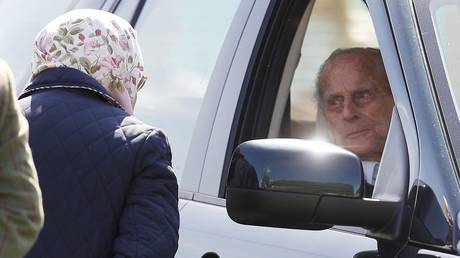 Queen Elizabeth’s 97-year-old husband Prince Philip has been issued a warning by police after photos emerged of him driving without a seat belt, just two days after his car flipped over after colliding with another vehicle.

Photographs obtained by British media showed the elderly prince, conspicuously without a seat belt, driving on Saturday near the Royals’ Sandringham residence in Norfolk.

“We are aware of the photographs,” a police spokesman told Reuters. “Suitable words of advice have been given to the driver and this is in line with our standard response when being made aware of our receiving such images showing this type of offense.”

It’s not clear, however, exactly what form the warning took. Asked about the presumably gentle reprimand, a spokesperson for the royal said that it was “a matter for Norfolk police.”

Amazing yarn, really. Two days after flipping his Land Rover and injuring several other people, 97 year old Prince Philip is back at the wheel of a new Land Rover, driving on a public road without a seatbelt. It’s almost like the normal rules don’t apply. https://t.co/XyBrcIKNCK

The unbuckled blueblood made headlines on Thursday after his car was flipped over in a collision. The prince emerged from the accident shaken but unhurt, while the driver of the car that he plowed into suffered a broken wrist. According to the injured woman, the royal family has yet to issue an apology to her, or reach out in any way.

#BREAKING: 🇬🇧 Just Moments Ago Prince Philip has been involved in a car crash with another vehicle. The Duke of Edinburgh, 97, was not injured in the collision, which took place close to the Sandringham Estate on Thursday, Buckingham Palace said. pic.twitter.com/jltukYUCT5

A Buckingham Palace spokesperson disputed this claim, telling media that “a full message of support was sent to both the driver and the passenger.”

Philip’s questionable driving practices have inspired a wide range of colorful Twitter commentary, including cheeky posts about royal meet and greets, as well as the prince’s eye-popping age.