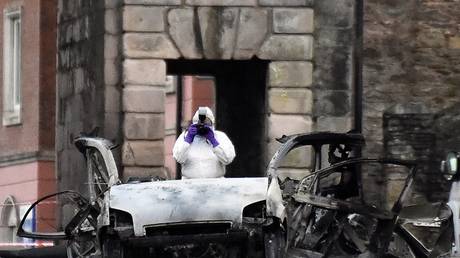 Police have arrested two suspects believed to be involved in a car bomb detonated in downtown Londonderry, Northern Ireland. Law enforcement officials say the main line of inquiry is that the ‘New IRA’ is behind the attack.

The explosion took place outside a local courthouse on Saturday evening. Police received a warning about the attack shortly before the bomb detonated. The blast engulfed the vehicle, reportedly a hijacked pizza delivery van, in flames. No one was injured.


Police say they have now arrested two individuals. Law enforcement officials also announced that the main line of inquiry is that the New IRA, an alliance of republican militant groups that have conducted similar attacks in Londonderry, is responsible for the attack.

Police said that those responsible for the assault “have shown no regard for the community or local businesses” and “care little about the damage to the area and the disruption they have caused.” No one has yet claimed responsibility for the bomb, which authorities have described as “crude.”

Police received a warning after the delivery van was hijacked. Authorities were then tipped off that a device had been left in the courthouse. Law enforcement immediately began to evacuate the area, with the bomb detonating about 15 minutes later.

The New IRA (NIRA) is a dissident Irish republican paramilitary group which formed after the Provisional IRA accepted a ceasefire in 1997. The group, which has been designated as a terrorist organization by the UK and the United States, aims for the end of British sovereignty over Northern Ireland and the creation of a unified Ireland.