Britain was urged to write off billions of dollars of Soviet debt in return for nuclear disarmament, declassified documents show. The 1991 plan was designed to stop nukes falling into the wrong hands after the USSR collapsed.

Then-British Prime Minister John Major received a letter from Jacques Attali, head of the London-based European Bank for Reconstruction and Development (EBRD), suggesting how to deal with the dangers of the Soviet Union’s collapse. “Dear John,” Attali wrote, “as you know the world’s main problems with the Soviet Union today are debt and nuclear weapons.

“I should therefore like to propose that we think about using one problem to solve another, that is to say, the organization of debt-nuclear swap – the partial or total exchange of nuclear weapons against debt relief. The price of world peace might only amount to some 1 percent of the combined annual defense budgets of the G7 [nations].” 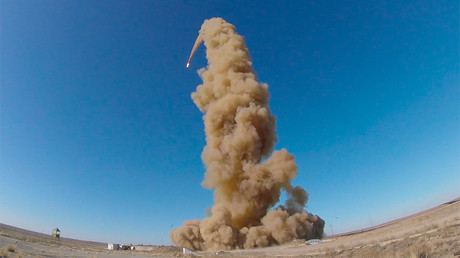 Overall Soviet debt was estimated to be $60 billion. There were around 25,000 Soviet nuclear devices. The debt-for-disarmament plan was never tested, appearing to have generated little interest in Downing Street as the Soviet Union’s dissolution accelerated.

The files, released for the first time by the National Archives, also contain records of frank and affectionate conversations between the last Soviet leader, Mikhail Gorbachev, and Major. Two days before his resignation, Gorbachev told Major the Soviet Union was on the point of collapse and may soon no longer exist.

In a phone conversation, he attempted to reassure Major that the nuclear arsenal remained under “strict control,” according to the Independent. Major spoke of Britain’s “enormous affection and respect” for Gorbachev and his wife, adding that his own wife, Norma, was with him and “sent her love.”

A record of the conversation said Gorbachev described the Majors as “great human beings,” adding: “Dear John, I and Raisa have developed an affection for you and Norma. I am allowing myself to be sentimental in saying it but at this time I can allow myself to be sentimental. In our family we still remember what Norma said during your visit to Moscow on your way to China – her reaction and her tears. Thank you for all of that.”

On December 25, 1991, Gorbachev finally announced his resignation, which was followed by a declaration that the Soviet Union had ceased to exist.