After the first Shabbat to pass since a right-wing maniac murdered 11 people at the Tree of Life synagogue in Pittsburgh, there’s been a search by the Jewish press for meaning in the terrorism. Tablet, however, took the unusual step of downplaying the factors leading to the massacre, and sought instead to blame the political left.

Shortly after the deadliest antisemitic attack in US history was carried out by anti-immigration extremist, Tablet (11/3/18) argued that “the left has just as much of a Jew-hatred problem on its hand, if not a much bigger one.”

The online Jewish magazine came out at first with sobering reportage of the event, with obituaries for the two brothers with developmental disabilities killed in the attack and examination of the degree to which the Christian Identity movement plays into American antisemitism. It was almost as if the publication, despite an overtly Zionist political compass, was going to put hasbara aside in the wake of the terror and report the story down the middle. Then staff writer Liel Leibovitz (11/3/18) jumped in.

A week after the attack, a Brooklyn synagogue was forced to cancel a political event after a young black man, who had worked for Democratic politician Christine Quinn, put up threatening antisemitic graffiti inside. Leibovitz seized the opportunity to remind the world that it wasn’t just the right who harbored antisemitism, but also the left, as evidenced by the recent graffiti. “If the left is honest,” he said,

it will spend the coming days and weeks asking how someone educated at a fine liberal university, on a scholarship from a fine liberal newspaper, could graduate from a job with a fine liberal politician—helping curb hate crimes, no less—to trying to intimidate and incinerate Jews.

There’s a lot to unpack in the sloppy reporting. For starters, Leibovitz made the quick assumption that the vandal’s motivation must come from his liberal background, but failed to mention his history of substance abuse and mental illness. He also made the false accusation that no one on the left has tackled the questions of legitimate antisemitism on the left. Jacobin, for example, has run several pieces on the subject.

But worse is that it engages in the dubious art of “bothsidesism,” the notion that in order to condemn right-wing anti-Jewish violence, one most come up with a reason to bash the left as well. The Brooklyn case is indeed terrifying, but it’s hardly in the same category of 11 dead bodies.

The New York Daily News (10/29/18) also admonished “the left” for the Nation of Islam’s Louis Farrakhan’s antisemitic rhetoric, even though he hasn’t inspired the kind of violence that the Trump administration has (such as the MAGA bomber), and most responsible writers would find most left-wing activists pay the NOI little heed. It’s not exactly a straw man argument, but it’s close. (The use of Farrakhan as a poster child for left-wing antisemitism is complicated by the NOI leader’s quasi-endorsement of Trump during the 2016 campaign: “Not that I’m for Mr. Trump, but I like what I’m looking at,” he said, claiming the candidate had turned down money from the “Jewish community.”) 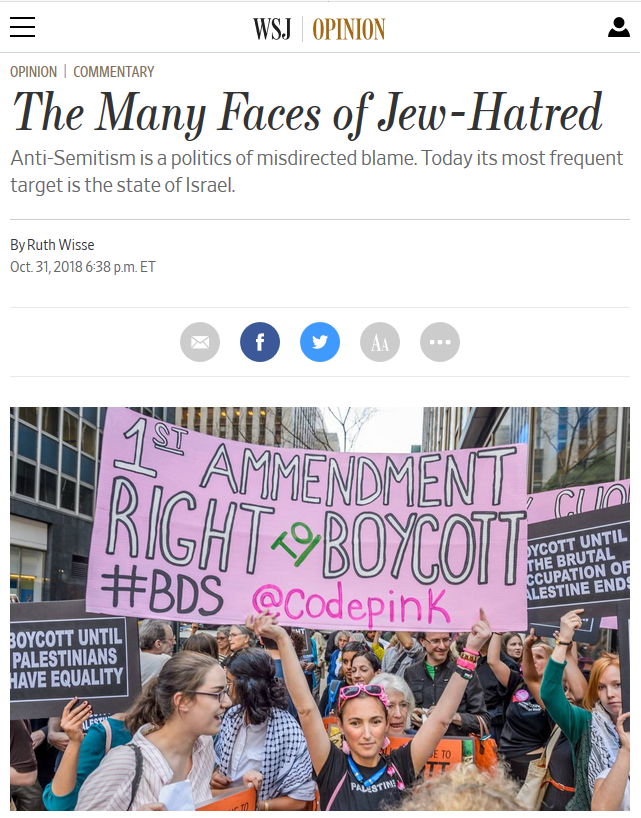 To the Wall Street Journal (10/31/18), the mass murderer in Pittsburgh was “less dangerous” than “the vicious movement to boycott Israel.”

The “it’s both sides” rhetoric dangerously ignores this context to the Pittsburgh attack. The Pittsburgh attack happened days after another white supremacist, unable to enter a black church in Kentucky, killed two black people at a grocery store instead. At the same time, a pro-Trumper sent mail bombs to several targets, including George Soros, often used as an antisemitic dog whistle for the right. And less than a week after the Pittsburgh attack, a Florida man inspired by the alt-right “InCel” (involuntary celibate) movement, who raged against interracial dating and the “invasion” from Central America, killed two women at a yoga studio. The Pittsburgh attack didn’t take place in vacuum—it is part of an ongoing wave of right-wing, racist violence. It is journalistic malpractice to say otherwise.

This hasn’t been a general problem in the Jewish press’s coverage of the Pittsburgh massacre. The Israeli newspaper Ha’aretz (11/4/18) castigated Israeli leadership for its lack of empathy toward the victims, for showing more solidarity with the Trump administration than with those on the receiving end of MAGA-inspired terrorism; it suggested that this could mark a turning point for American Jewish opinion of Israel. The Jewish Telegraphic Agency (11/2/18) reported that former Anti-Defamation League chief Abraham Foxman made the unusual move of protesting the Israeli government’s choice to politicize the tragedy  by “stand[ing] in solidarity with the President of the United States” rather than “in solidarity with the American Jewish community in a time of pain and anguish and tragedy.” And reporters both inside (Forward, 11/4/18) and outside the Jewish press (Huffington Post, 11/3/18; New York Times, 11/3/18) made the link between the Pittsburgh attack and the 2015 Charleston shooting, where nine African-American churchgoers were murdered by a white supremacist, and described how different faith groups were coming together in solidarity with Jews in mourning.

Tablet’s choice to come out swinging against the left—even though the left was also a target in the Pittsburgh attack, since the shooter was particularly angry at the synagogue’s support for refugee resettlement—is a telling deflection. If Tablet were to firmly place the Pittsburgh victims alongside other minority targets of far-right and fascistic terror, it would have to accept that the rhetoric of the Trump administration—or at least of its more zealous supporters—shares some responsibility for the carnage. It would also force Tablet to paint Israel in a bad light, as the Israeli government appears more invested in maintaining good relations with Washington than with the US Jewish community; the Israeli ambassador to the US (Fox News, 10/28/18) went out his way  to protect the administration by drawing a false equivalence between organized right-wing violence against Jews and the perception of too much support for Palestinians on college campuses.

The Jewish press is more important now more than ever, in a time of rising antisemitism from Pittsburgh to Hungary to Ukraine. Many are rising to the occasion, asking the uncomfortable questions and confronting narratives that may have once been off limits. Tablet, among others, does do that at times, but falling back on partisan hand-wringing over Israel only constrains a necessary outlet for reporting and analysis on right-wing racist violence.

It’s understandable that for Leibovitz and Tablet’s political project, it’s not easy to acknowledge these things. But a journalist’s job is to report the facts and the context as they are, not as one wants them to be.