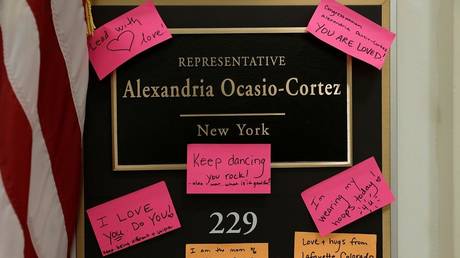 Boasting how she already defeated the Republicans after less than a week in office, newly minted Congresswoman Alexandria Ocasio-Cortez (D-New York) used a phrase for group sex to describe the Democrats’ plans until 2020.

An interview with the Washington Post, published on Wednesday, featured Ocasio-Cortez denouncing the Trump administration and the Republican party as racist, sexist relics of the past, losers in the political and cultural war.

“I also think it’s encouraging because this is my sixth day in Congress and they’re out of all their artillery,” she said at one point, saying the Republicans have been trying to manufacture outrage about her with dancing videos and fake nude photos.

“What have you got left? I’m six days into the term, and you already used all your ammo. So enjoy being exhausted for the next two years while we run train on the progressive agenda,” she added.

It was a very unfortunate turn of phrase, in more than one way.

Conservative pundits were quick to point it out, too.

And while some interpreted her remarks as a desire to “run train” on America or the Trump administration, at least one self-described liberal was appalled that her actual phrasing meant the Democrats will sexually abuse the progressive agenda – the same one Ocasio-Cortez is actually championing.

What the ever loving fuck was Cortez thinking??

“So enjoy being exhausted for the next two years while we run train on the progressive agenda.”

Is she saying she wants to destroy the agenda? jfc…

Ocasio-Cortez has received disproportionate media attention long before she even got to Capitol Hill, and has shown remarkable ability to parlay that into political influence with clever quips on Twitter – which makes her latest phrasing gaffe that much more puzzling.