In an acid comment, Philippines leader Rodrigo Duterte called Barack Obama a “son of a b****,” warning the US president against lecturing him over the Philippines’ human rights record in its brutal war on drugs at a global summit in Laos, where the two are set to meet.

“Son of a b****, I will curse you in that forum,” the acid-tongued Duterte said before departing for Laos, where the Association of South East Asian Nations (ASEAN) is hosting a meeting of global leaders, including the US and Russia.

The statement came in reaction to the information President Obama was to address the alleged extrajudicial killings during the anti-drug campaign in the Philippines that has already claimed 2,400 lives.

Speaking to journalists on Monday, Duterte insisted he was “a president of a sovereign state” and that his country has “long ceased to be a colony of the United States.”

“I do not have any master except the Filipino people, nobody but nobody,” Duterte went on to say, also cautioning other world leaders about addressing the issue of the anti-drug campaign in his country.

The Philippines president was set to meet Barack Obama on Tuesday, but it appears the talks are now in jeopardy. The US leader has now ordered his team to look into whether a “constructive, productive” dialogue is possible under the current circumstances.

“I always want to make sure if I’m having a meeting that it’s actually productive and we’re getting something done,” Obama told reporters in a press conference following the G20 summit in China.

“The issue of how we approach fighting crime and drug trafficking is a serious one for all of us. We’ve got to do it the right way,” the US leader went on to say. He noted that in case the meeting takes place, the “topic will be raised.” 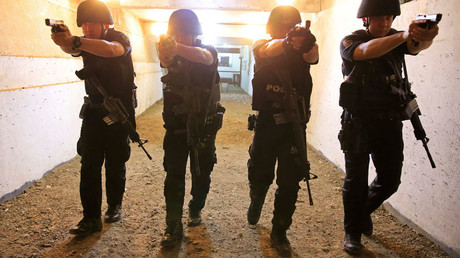 After the arrival in Laos on Monday, Duterte said he would still consider talks with Obama. “Maybe, if I feel good. I don’t want to quarrel with him.”

Rodrigo Duterte came to power in May, promising to wipe out drug dealers and put an end to the problem in his country. According to the latest police figures cited by AFP, since June law enforcers have killed 1,011 suspected criminals, with an additional 1,391 “deaths under investigation.”

The approach gained vast support among the average public, however raising concerns from political opponents, human rights groups and the US in particular.

The Philippines leader is notorious for his inflammatory comments. On one occasion he also called Pope Francis “a son of a b****.”

During the presidential election campaign that brought him to power, Duterte also lashed out at the US ambassador to the Philippines, calling him a homosexual.