In an exchange between Budowsky and Podesta in January 2016, Budowsky firmly rejects the idea that the former president’s “sex life could be damaging” to his wife’s White House bid. 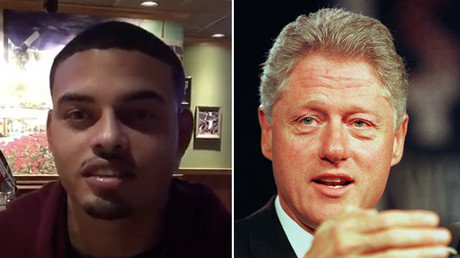 Instead, he argues that “WJC’s presidency and his personal appeal are huge assets” to her campaign.

“But normal people with important things on their minds don’t give a rats ass about [Monica] Lewinsky,” Budowsky continues. “And I have offered a dozen people to bet with me if they think Donald will be elected and not one will take the bet because they know these issues help and do not hurt Hillary with women.”

In December 1998, Bill Clinton became only the second president in the history of the US to be impeached. He was charged with lying under oath to a federal grand jury and obstructing justice.

The impeachment charges against Clinton arose from Independent Counsel Kenneth Starr’s investigation into the president’s conduct during the Monica Lewinsky sex scandal and the Paula Jones sexual harassment lawsuit.

Clinton was later acquitted on both articles of the impeachment.

Budowski, a close Clinton ally, reinforces his point by writing that “the only people who care about the sex issues at a time of economic concern and ISIS are Republicans, some television producers and ratings desperate execs and Ruth Marcus types under pressure to generate page views.”

The email exchange was prompted by media reports citing sources “close to the Clinton’s” which apparently suggested Hillary’s campaign would be stronger if Bill was less involved.

Budowski writes,”My point in this note is that whoever is peddling this crap from somewhere within the Clinton camp is having the effect of encouraging the media to give the issue more prominence. They are hurting both Clintons. I always stay out of intra-staff stuff like this, both Clinton’s would be well advised to advise the people in their orbit to shut the hell up about this.”

Podesta replies that he’s sure the leaks are not from staff, but appears less sure about consultants as he is “always nervous about being fully certain about what they are up to.”

In January, Podesta told MSNBC that he hoped Clinton’s Democratic Party rival Bernie Sanders would not try using Bill’s sex scandals as leverage in his bid to secure the nomination.

Earlier, WikiLeaks releases revealed an email from the personal attorney for the Clintons during the Lewinsky scandal, David Kendall, to Podesta in January 2016. The correspondence concerned historical sexual assault allegations made against Bill Clinton in the 1990s.

In an email with the subject line “History of Juanita Broaddrick Allegations”, Kendall says he has attached documents including a 1998 affidavit by Broaddrick, one of Bill’s accusers, in which she reportedly wrote that her allegations of sexual assault in the 1970s were “untrue”. Broaddrick later recanted the affidavit, alleging that Bill Clinton did assault her.

“Please let me know if there’s anything else I can provide about this slimefest,” Kendall closed his email to Podesta.