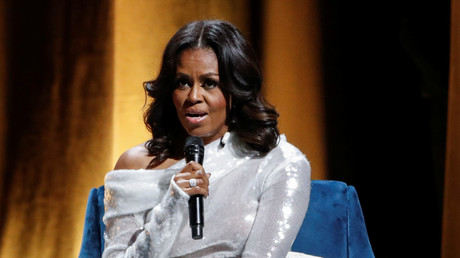 Michelle Obama inadvertently swore at a public event in New York and people seem to be losing their minds in unbridled joy over the outburst.

The former first lady was speaking at a book event at the Barclays Center in Brooklyn when the swear word slipped out, sparking a tsunami of shock and delight across the 19,000 seater arena – and on social media.

Obama was outlining her view that women can’t have equality in both their marriage and professional life at the same time when her potty mouth kicked in.

“That’s a lie,” she said. “And it’s not always enough to lean in, because that sh*t doesn’t work all the time.”

While many were most pleased by the fact that Obama was apparently dissing Facebook CEO Sheryl Sandberg’s famous “lean in” mantra for women in business, others were simply overcome with glee at hearing a former president’s wife utter such a word.

Obama realized her faux pas straight away, remarking: “I forgot where I was for a moment!”

Some Obama fans were so overcome by hearing her utter the expletive that they reacted in the extreme, saying their lives have “been forever changed.” One even claimed “my soul left my body,” while another appeared to be inspired to ink the utterance as a tattoo.

Last night, Michelle Obama said “that shit don’t work” in reference to the idea of Leaning In and my soul left my body

Anyway I got to hear Michelle Obama accidentally say “shit” and dance tonight in front of 1000’s of people and it truly made my life. She’s a real one. So funny. So raw. So real. SO INSPIRING! pic.twitter.com/oQulqcG6nt

Obama is promoting her new book, Becoming, which sold two million copies in the US and Canada in just 15 days.