The Pentagon may not be surprised by the new Russian hypersonic missiles – but why not use them as a pitch for more money? A military budget about 10 times that of Russia is not enough, according to the DARPA director.

Asked by a gathering of journalists on Thursday if the United States is spending enough on its own hypersonic missile program, Steven Walker, the director of the Pentagon’s Defense Advanced Research Projects Agency (DARPA), replied, “I would say no.”

“The dollars that were allocated in this budget were great, but they were really focused on adding more flight tests and getting some of our offensive abilities further down the line into operational prototypes,” he said. “We do need an infusion of dollars in our infrastructure to do hypersonics.” 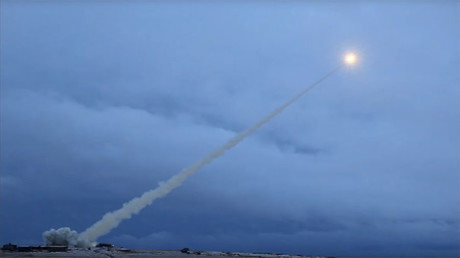 Separate statements made on the same day by Pentagon spokesman Dana White exuded a bit more confidence – and far less concern – about how well the US arsenal stacks up against Russia’s.

“We’ve been watching Russia for a long time. We’re not surprised,” White said, following Russian President Vladimir Putin’s State of the Nation address, which highlighted Russia’s new nuclear arsenal – including hypersonic missiles that have a nearly unlimited range and are capable of outmaneuvering missile defense systems.

“America is moving forward to modernize our nuclear arsenal and make sure our capabilities aren’t being matched,” White insisted.

Since taking office, President Donald Trump, with help from the Republican-controlled Congress, has added more than $200 billion to the projected levels of defense spending for fiscal years 2017 through 2019 – a sum more than twice the size of Russia’s entire defense budget, which totalled an estimated at $69.2 billion in 2016. Washington’s projected military expenditures for fiscal year 2018 is set at $700 billion.

A fair part of that money apparently gets lost to wasteful spending and sloppy accounting. An internal audit leaked to the press in February found that a large Pentagon agency failed to properly keep track of more than $800 million in constructions projects. Plans for a full audit will set the department back another $367 million in 2018.

In 2016, it was reported that the Pentagon had intentionally buried an internal study that exposed $125 billion in administrative waste amid fears Congress would use the explosive findings as an excuse to slash the defense budget.

And while Pentagon officials beg for more money to counter Russian hypersonic technology, there seems to be plenty of cash – $1.4 trillion, to be exact – to pay for Lockheed Martin’s defect-riddled F-35.