Despite having a “fairly good penetration” of the Syrian opposition groups, the US has not seen any evidence suggesting that the militants in Idlib are capable of staging a chemical attack, the US defense secretary claimed.

“We have zero intelligence that shows the opposition has any chemical capability,” James Mattis told journalists on Wednesday, noting that despite its deep “penetration” of the armed Syrian opposition groups, the US has never “seen” the militants using any chemicals. Citing “American” and “international” data, he emphasized that only the forces loyal to Syrian President Bashar Assad “had done this before.” 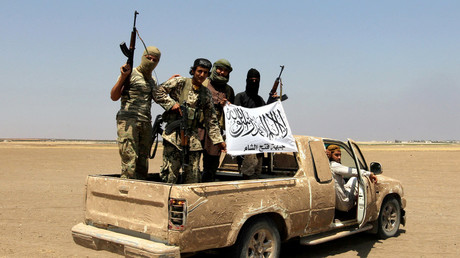 Backing his words with little factual proof, Mattis resorted to the usual US rhetoric and accused Damascus and its allies – Moscow and Tehran – of being ultimately responsible for the Syrian conflict. Neglecting to mention any terrorist and armed Islamist groups, or the involvement of the US-led coalitions, Mattis claimed the war “did not have to happen, but for Assad… but for Russia’s regrettable vetoes in the United Nations… but for the Iranian’s support of Assad’s murders.”

Mattis’ comments come amid Russia’s repeated warnings that the militants entrenched in the Syrian Idlib province are plotting a provocation to trigger a Western military response. On July 28, Russia’s Defense Ministry said that unknown chemicals had been delivered to the area, with the assistance of the infamous White Helmets group. On July 31, Russian Foreign Minister Sergey Lavrov said that “there is no doubt” that the extremists were preparing a false flag chemical incident, adding that the proof was presented by Russia to the UN and the OPCW, as well as the US authorities. However, this fact apparently went unnoticed by Mattis, who again said Washington has never seen any evidence of a false flag attack being prepared. 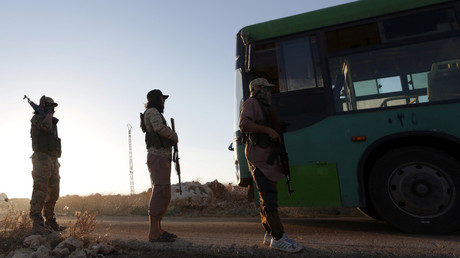 “So we have made very clear that by putting out innuendo, that somehow any chemical weapon use coming up in the future could be ascribed to the opposition, well, we want to see the data,” he said on Wednesday, even though earlier he said Washington was in “active communication” with Moscow to prevent any chemical incidents in Syria.

Moscow believes that a provocation is being prepared with tacit support from Washington, which could then blame Damascus to justify further air strikes against Syria, potentially larger in scale than those jointly conducted by the US, UK, and France in April. More than a week ago, the missile destroyer USS Ross was deployed to the Mediterranean, carrying 28 Tomahawk cruise missiles. It came after a similar move of the USS The Sullivans to the Persian Gulf, and the rebasing of a B-1B Lancer strategic bomber to an air base in Qatar. The Russian Defense Ministry said the “preparations are the latest evidence of the US intention” to take advantage of a chemical provocation.

Washington, however, continues to dismiss accusations as a “concentrated disinformation campaign to discredit the United States and international partners and allies.” Nonetheless, according to reports, the US has already drafted a preliminary list of targets for its potential strike against the Syrian Army and Damascus.