A Pentagon employee claims he was stripped of his security clearance after he complained about Department of Defense contracts with Stefan Halper – the man who was later revealed to be keeping tabs on Donald Trump’s campaign.

The case involves Adam Lovinger, who had worked as a strategist in the Pentagon’s Office of Net Assessment (ONA) for 12 years. His attorney, Sean M. Bigley, recently revealed details of his case in an interview to The Washington Times newspaper, published on Wednesday.

“As it turns out, one of the two contractors Lovinger explicitly warned his ONA superiors about misusing in 2016 was none other than Halper,” Bigley said in his complaint. Created under the Pentagon’s authority, the ONA aims to evaluate the future prospects of US military capabilities and its military potential.

Lovinger reportedly wrote of “the moral hazard associated with the Washington Headquarters Services contracting with Stefan Halper,” in an internal email dated from October 2016 to his bosses. He said that ONA Director James Baker hired Cambridge professor Stefan Halper to “conduct foreign relations” – which is generally assigned to government officials. 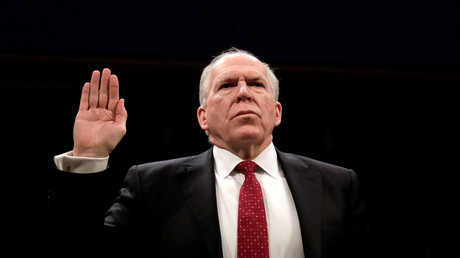 “It was a topic of conversation within the office,” Bigley said. “What is Halper doing, and why is he being paid astronomically more than others similarly situated?”

Bigley insists that “nobody in the office” seemed to know what Halper was doing for his money. “Adam [Lovinger] said Jim Baker, the director, kept Halper’s contracts very close to the vest. And nobody seemed to have any idea what he was doing at the time.” Halper reportedly subcontracted “out a good chunk of it to other academics,” he would compile them all “and then collect the balance as his fee as a middleman,” the attorney said.

Lovinger’s security clearance was revoked on May 1, 2017, and since then he is working in the agency doing “clerical chores,” the report said. The ONA employee later filed a whistleblower reprisal complaint with the Department of Defense Inspector General against Baker.

Bigley, in turn, filed the complaint July 18, saying that Lovinger’s bosses misused their security clearance process in order to punish him. He confirmed that the criminal investigative division of the inspector general has already interviewed Lovinger about the ONA contracts.

Halper was revealed in spring this year as the man allegedly sent by the FBI to scope out two of Trump’s campaign advisers for his 2016 election tilt. The US media, which initially didn’t mention his name, wrote that the FBI had used an informant to get information out of George Papadopoulos and Carter Page.

The scandal came to a head when Trump himself tweeted that an informant was “implanted” on his campaign.

Reports are there was indeed at least one FBI representative implanted, for political purposes, into my campaign for president. It took place very early on, and long before the phony Russia Hoax became a “hot” Fake News story. If true – all time biggest political scandal!

The academic had a very rich backstory, serving as a White House official in the Nixon, Ford, and Reagan administrations. He has long-established links to the CIA and MI6 and was even embroiled in a spying fiasco during the 1980s that involved two presidents. During the 1980 election he was in charge of a group of CIA operatives who were tasked by the Reagan campaign with spying on the Carter administration.