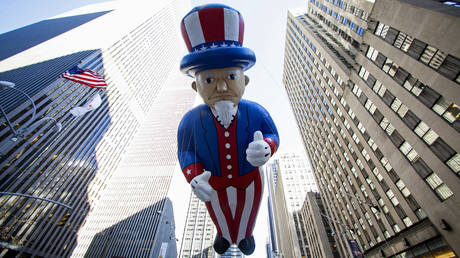 US Defense Department officials are pushing for an escalation of “information warfare,” urging the military to think outside the box of traditional conflicts as hysteria over adversaries’ “influence operations” persists.

Rather than hiding from the transparency afforded by the 24-hour news cycle and pervasive social media, our adversaries embrace that cycle and they use it to their advantage

He emphasized the importance of “controlled messaging and other influencing tools” over the counter-terrorism missions that have been the Pentagon’s bread and butter for the past 17 years, spilling over from one country into the next to the point that the US now has “counterterrorism” missions in 40 percent of the world’s countries.


Bemoaning the military’s “20th century approach to messaging,” Knaggs pointed to the need for new technologies to “isolate and identify disinformation,” as well as the need to liaise with civilian agencies, NGOs and “individual citizens who bring transparency to malign activities of our competitors.” While simply disseminating US propaganda through television and radio was once enough, military leaders now see urgent need for automated translation technologies and equipment that can rapidly analyze social media comments.

That’s not to say the US should throw out all lessons from the War on Terror, of course – “As DoD shifts to meet the demands of great power competition … we are hard at work institutionalizing the substantial expertise in [irregular warfare, or IW] that we have over the last 17 years of irregular conflict,” Knaggs said.

“Our competitors have proven how irregular approaches can effectively shape an environment to their advantage in the pursuit of their national interests,” Knaggs added, without pointing fingers and seemingly unable to decide whether the likes of China and Russia were “adversaries” or merely “competitors.”


Ex-defense secretary Jim Mattis “wanted to end this boom-bust cycle in IW that we’ve all experienced,” said Owen West, assistant secretary of defense for special operations and low-intensity conflict, who also spoke at the symposium. Mattis’ National Defense Strategy – still in place after his departure in a feud over the president’s Syria strategy – requires that “irregular warfare become a core competency for the DoD.”