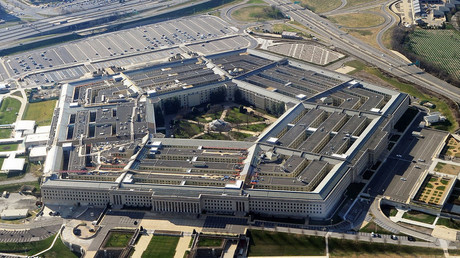 The Pentagon failed to account for $6.5 trillion in its financial statement, a recently-recovered Inspector General’s report on the 2015 fiscal year said. It reveals the audit of the Department of Defense was “materially misstated.”

The army failed to provide “accurate, complete, timely and well-supported” documents that could have explained the use of trillions of dollars in quarterly and yearend adjustments.

The US military made $2.8 trillion in wrongful adjustments in one quarter alone in 2015, and $6.5 trillion for the year, but could not provide anything that would detail what it spent the money on.

There were a total of 64,321 journal voucher (JV) adjustments made in the third quarter and 142,355 by the yearend, but only 7,083 of them were supported with detailed documentation of transactions.

The IG has also found that 16,513 of 1.3 million records were “removed” from the Pentagon’s budget system during the third quarter of the 2015 fiscal year.

“Without support for why these records were removed, we could not determine whether the records continued valid transactions,” the IG said, adding that the Defense Finance and Accounting Service Indianapolis (DFAS Indianapolis) could not explain why the files were removed.

At the same time, data that Army General Funds (AGF) cited in its financial reports in both the third quarter and yearend “were unreliable and lacked an adequate audit trail,” which are necessary to confirm “accuracy, completeness and timeliness” of transactions, the Department of Defense Inspector General found.

The IG obtained computer-processed data, which the report said only supported the conclusions, even though investigators could not “attest to the reliability” of the files they obtained from the Army.

DFAS Indianapolis said that misstated adjustment occurred because they “decided to use system-generated adjustments rather than manual” when preparing AGF’s financial statements.

“The unsupported JV adjustments occurred because OASA(FM&C) and DFAS Indianapolis did not prioritize correcting the system deficiencies that caused errors resulting in JV adjustments,” the IG said, adding that “sufficient guidance for supporting system-generated adjustments” was not provided either.

However, the military has reportedly downplayed the severity of the findings.

“Though there is a high number of adjustments, we believe the financial statement information is more accurate than implied in this report,” an army spokesman told Reuters, stressing the Pentagon’s eagerness to root out problems.

Earlier this year, Congress set a September 30, 2017 deadline for the DoD to obtain a full financial statement, but there is a risk that “the Army will not achieve audit readiness.”

The findings by the DOD’s IG were released back on July 26, but at the time, the report failed to attract attention to the Pentagon’s fudged accounting.

However, the Pentagon – the single largest US government bureaucracy – has been accused of delaying its financial accounting multiple times.

A former Defense Inspector General official in charge of auditing the Army General Fund, Jack Armstrong, told Reuters that the same type of unjustified changes to Army financial statements, as the IG’s report revealed, were already being made when he retired in 2010.

“They don’t know what the heck the balances should be,” Armstrong said.