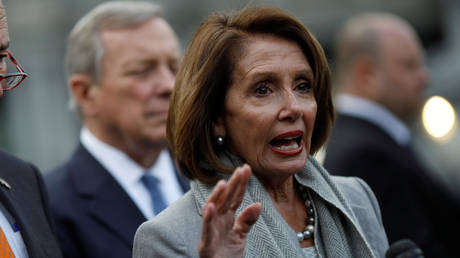 House Speaker Nancy Pelosi is demanding President Donald Trump postpone his State of the Union address until after the government reopens, threatening to use her little-known power of invitation to deplatform the president.

In a letter sent on Wednesday, Pelosi requested Trump reschedule his speech until they can pay the Secret Service – part of the Department of Homeland Security, which has gone unfunded since the shutdown began 26 days ago. She used Trump’s own Homeland Security secretary’s words to twist the knife, quoting Kirstjen Nielsen’s insistence that “the full resources of the Federal Government … be brought to bear” for the high-security event -– then finished the job by suggesting Trump submit the speech in writing.

As Speaker, Pelosi is responsible for inviting the president to give his annual address to Congress – a function which has been largely ceremonial for decades, until now. She invited Trump to speak on January 3, and she can uninvite him just as easily, though she has not officially done so.


House Majority leader Steny Hoyer did, however, during a CNN appearance later on Wednesday, telling the host in no uncertain terms that “the State of the Union is off.” He walked back his comments after a staffer told the station he’d “mischaracterized” Pelosi’s letter.

While Trump has not responded to either Democrat, the threat of silencing his big television moment is likely to catch the media-hungry president’s attention. The SOTU can be delivered in writing – indeed, it was exclusively delivered in writing before Woodrow Wilson spoke directly to Congress in 1913 – but it’s difficult to imagine Trump missing an opportunity to strut his stuff in front of the cameras.

The Secret Service appeared to call Pelosi’s bluff, according to reports citing unnamed DHS officials as saying they were completely prepared to cover the address, which one official called a “no-fail mission.” Employees of unfunded agencies considered “essential” – including some Coast Guard, Transportation Security Administration, and, yes, Secret Service agents – have been working without pay while their peers are furloughed, and it seems Pelosi did not actually consult with the Secret Service before sending her letter.

Fox News’s John Roberts says a DHS official told him that no one from Pelosi’s office called the Secret Service to ask if they had concerns about SOTU before she sent that letter. #StateoftheUnion#GovernmentShutdown

Republicans were not having any of Pelosi’s disrespect and eagerly proposed their own alternative SOTU scenarios, proving they knew the arcane rules of presidential addresses as well as she.

President @realDonaldTrump should deliver the State of the Union at the border, to a crowd of 10,000.

It is legal and can be funded by the government. He need only send a transcript or video to Congress.

He should invite all Members of Congress too.

Get this idea to Trump! 🇺🇸

President Trump should tell Pelosi she can watch the state of the Union: on TV while he delivers it from the White House in front of an audience of veterans and angel moms

RT if you agree

Even people fired by Trump thought Pelosi’s move was a low blow (especially after he was nice enough to invite her to lunch yesterday!).

Though Pelosi had her own cheering section, including Democratic lawmakers and impeachment-crusading billionaire Tom Steyer.

.@SpeakerPelosi did the right thing in cancelling the #SOTU until the shutdown ends. We already know the facts about where the union stands: the border is not in crisis, the wall is not a useful project, Mr. Trump is not a normal President, and we need to impeach him.

Canceling the speech would deprive Trump of an opportunity to blame the Democrats for the shutdown, according to CNN’s Kaitlan Collins, who claimed presidential speechwriter Stephen Miller had been interrupted in the midst of penning an anti-Pelosi screed when he was interrupted by the letter.

Stephen Miller was writing State of the Union address to blame Democrats for shutdown — until Nancy Pelosi pulled the rug out: report https://t.co/c4aBdbXBYO