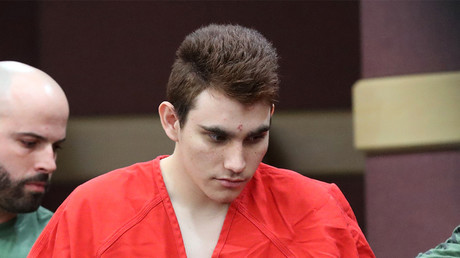 Nikolas Cruz, who is accused of killing 17 people in a high school shooting in February, has been inundated with sexually provocative letters and money from besotted fans, according to a local newspaper.

Teenage girls and women have bombarded 19-year-old Cruz, who is currently being held in  Broward County jail, with romantic and sexually-explicit mail, according to local newspaper the Sun Sentinel, which obtained photocopies of the letters.

A woman from Chicago enclosed nine “suggestive” photos, while another from Texas commented on his “beautiful” eyes. An 18-year-old from New York included pink hearts in her letter, saying “I know you could use a good friend right now.” Another girl sent photos with Hello Kitty Snapchat filters.

Love letters to a mass shooter. In 40 years the public defender has never seen so much mail for an inmate. Nikolas Cruz has received letters, books and money from as far away as England @nbc6pic.twitter.com/hRKp3JRf2k

Broward County Public Defender Howard Finkelstein, who is representing Cruz, said that the amount of mail was unheard of and is deeply concerning. “In my 40 years as public defender, I’ve never seen this many letters to a defendant. Everyone now and then gets a few, but nothing like this,” he told the Sun Sentinel

“The letters shake me up because they are written by regular, everyday teenage girls from across the nation,” he said. He described the phenomenon as “perverted.”

Cruz’s mail is opened by jail officials because he is on suicide watch. Finkelstein said officials do not pass on mail to Cruz with pictures of “scantily-clad teenage girls.” He has also received over $800 in his commissary account from donations.