The parents of a British man held by Kurdish fighters in Syria have accused the Foreign Office of being “completely obstructive” in their bid to secure their son’s release. It is the second time in less than a week that the department has been criticized for failing UK citizens detained abroad.

John Letts and Sally Lane, who live in Oxford, said the Foreign Office, along with Minister Boris Johnson, have done nothing to help free their 22-year-old son, who they claim struggles with mental-health issues. 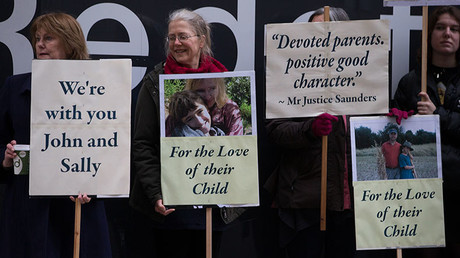 Johnson is already under fire and facing calls to resign after making inaccurate remarks about a British mother detained in Iran, which could potentially add a further five years to her prison sentence. During a Commons hearing at the beginning of the month, Johnson suggested journalist Nazanin Zaghari-Ratcliffe had been in Iran training journalists when she was arrested in 2016.

Zaghari-Ratcliffe, who is currently serving a five-year sentence accused of attempting to overthrow the regime, insists she was in the country to introduce her then-18-month-old child to her Iranian relatives. The woman’s employer claims she is now facing new accusations of “spreading propaganda against the regime” as a direct result of Johnson’s remarks. He was forced to apologize for his comments, and stressed that Zaghari-Ratcliffe had only been there on holiday.

The embattled foreign secretary is now accused of failing the family of Jack Letts, dubbed ‘Jihadi Jack’ by British media. Letts is being held in prison by Kurds in Rojava, a self-declared autonomous region in northern Syria. He was captured by the Kurds in the Islamic State (IS, formerly ISIS/ISIL) stronghold of Raqqa, Syria in 2015. Letts’ parents say their son was brought there after being injured in a bomb blast.

Letts had travelled to Syria at the age of 18. He had dropped out of school two years earlier and converted to Islam. “The Foreign Office have been completely obstructive. We have been sent four identical letters saying that they can’t do anything,” his mother said.

The parents said they first made contact with their son last month after not hearing from him since July. “We managed to find the contact details from the prison where Jack is being held from an Amnesty report,” Lane said.

“It seems absurd that we, as ordinary individuals, who don’t have any of the machinery of government to help us, can establish our own contacts with Kurdish officials, and the government itself [is] unable to do so.”

The parents condemned comments made by Foreign Office Minister Rory Stewart that all UK nationals fighting with IS in Syria should be killed there rather than be allowed to return home.

“Surely this is illegal. In a democratic system in this country, you don’t have the death penalty and you can’t just go and kill anyone if you think they’re guilty,” Letts’ father, John, said. “We’re outraged, and everyone decent should be outraged, by Rory Stewart.”

A spokesperson for the Foreign Office said: “The safety and security of our country, our people and our communities remains the government’s number one priority. For that reason, we have consistently made clear over the last few years that people should not travel to Syria and parts of Iraq.

“As outlined in the FCO’s travel advice, the government is unable to provide support to British nationals in Syria as the UK government does not have consular representation there.”