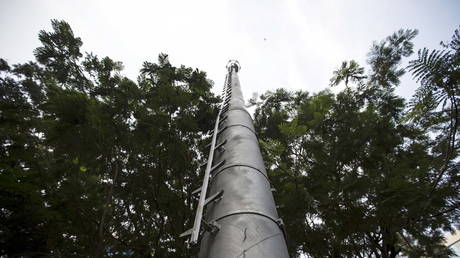 California parents are demanding an elementary school remove their on-campus cell tower after four students and three teachers were diagnosed with cancer in just three years.

Some students at the Weston Elementary School in Ripon, San Joaquin County, California have been pulled from attending the school over the spike in cancer cases, reports the Sacramento Bee.

On Monday evening about 200 angered parents attended a Ripon school board meeting to demand action. The kindergarten-through-eighth-grade school has about 400 students.

The Ripon Unified School District said tests carried out on the cell tower showed it is working normally and within safety standards, but the board are talking with the telecommunications company about moving the tower.

Four students have been diagnosed with cancer since the controversy first erupted in 2016. Monica Ferrulli, a parent of one of the students who was treated for brain cancer in 2017, claimed the RUSD is in “denial” and citing an obsolete American Cancer Society study to justify the tower’s placement.

“We had a doctor tell us that it’s 100 percent environmental, the kind of tumor that he has,” said Ferrulli to CBS Sacramento, and added that an inspection of the tower arranged by parents showed much higher readings than the RUSD-hired engineers found in 2018.

The school district, who reportedly receives $2,000 per month for the tower, has said while they empathize with families, they have no out clause in their 25-year lease contract with Spirit – the company that owns the tower – meaning both the school district and Spirit will have to mutually agree on a relocation.