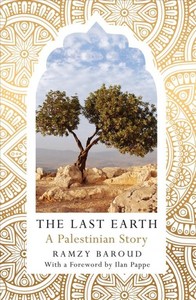 I am embarking on a world tour that is set to take me to several countries in five continents, starting Feb 20. I am taking advantage of the publishing of my book The Last Earth: A Palestinian Story to shed light on a new take on the history of the Palestinian people, one in which the refugees are the core theme. The Last Earth is not the story of the past only, but the present and the future as well. I hope you like the book and come to see me when I arrive to speak at your city.

I am scheduled to speak in the US, Canada, the UK, New Zealand, Australia and South Africa. Please see below for more details about each specific event. The list will be updated frequently.

The book which is published by Pluto Press has been described as a “fierce and strenuous challenge to the traditional approach to history in which Palestinians, mostly refugees, are the true protagonists.”

Professor Ilan Pappe, who also wrote the Forward to the book, commented:

“This moving and perceptive book is a journey to the heart of the evils of occupation and colonization suffered by the Palestinians on the ground. It allows the people themselves to narrate authentically and with all the complexities their aspirations, suffering and struggles. Ramzy Baroud knows how to listen, contextualize and convey an inhumanity that has gone for too long and it is hoped that books like this would contribute to its end.” ~ Ilan Pappe

The Last Earth is a non-fictional narrative of modern Palestinian history. It is a unique rendition of people’s history – an account of how major historic events in Palestine and the greater Middle East impacted ordinary people, as well as how that mass of people, in their tenacity, and even in their dispossession, represent a force that determines history.

Radio/Video interview, Seattle, January 6, regarding the book and its main message:

Read this review by Vacy Vlazna:

Here is a shorter video on the need to retell Palestinian history and why:

Learn more about the book