The British charity, Oxfam, has received 26 fresh accusations of sexual misconduct since the breaking of the Haiti scandal, MPs have been told by chief executive Mark Goldring.

“Across Oxfam Great Britain we have had about 26 stories, reports come to us which were either new reports come out as a result of the stories, or earlier stories where people said, ‘I didn’t necessarily report this at the time,’” Oxfam chief executive Goldring told the Commons International Development Committee.

“Over an extended period of time, I am not talking about recent cases,” Goldring added. “We really want people to come forward wherever they are and whenever this happened. Some of those cases relate to the UK, some of them relate to our international program.” 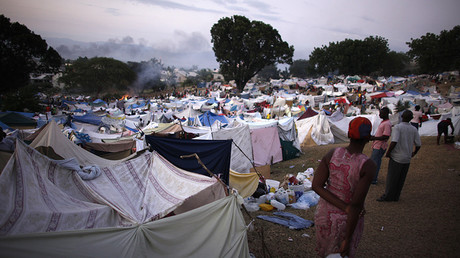 Goldring also told MPs that, according to an internal investigation, no sex workers used by charity employees were underage. When the scandal initially broke there were suggestions that some of the prostitutes used by Oxfam staff may have been under 18.

In a grueling testimony, the Oxfam chief also revealed that 7,000 people had canceled regular donations to Oxfam in the wake of the sex scandal. MPs heard how Goldring regretted telling the Guardian that he hadn’t slept in six days thanks to the pressure put on him by the scandal.

“I make no excuses, I make an apology for comparing what I was going through with the bigger picture,” he said. “My first concern is the women of Haiti and anybody else who has been wronged as a result of Oxfam’s program.

“I shouldn’t have put my own sleep, or lack of it, in the public domain. I have tried hard to balance work and sleep over the last two weeks. The results I believe are that I’m continuing to do my job and I’m continuing to make appropriate decisions. I hope I have led Oxfam competently, but that’s for others to decide.”

Labour MP Stephen Twigg said it was striking just how often Goldring apologized throughout the hearing. The MP did admit that there was “a lot to apologize for,” but the committee appeared to appreciate the apologetic tone that Goldring adopted in relation to the scandal.

Save the Children has recently come under fire for failing to tell the Department for International Development (DfID) about sexual misconduct allegations against Brendan Cox, widower of murdered Labour MP Jo Cox. Three DfID heads also spoke at the hearing.