It was to our great astonishment, consternation, and shock that we perceived the Japanese Self Defense Forces display the Rising Sun Flag in front of the gathered crowds during the military parade on Bastille Day, 2018. 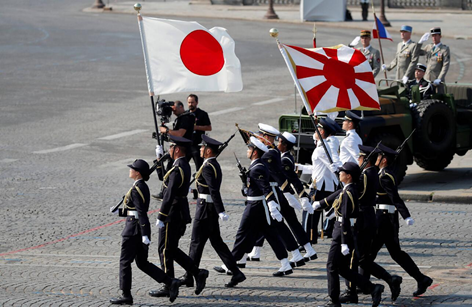 Not since the Nazis paraded the Swastika on June 14th, 1940 has there been such a sight on the Champs Elysées.

As you know, the Rising Sun banner is the war flag of the Japanese Imperial Military and the global symbol of Japanese Imperial Terror from 1894-1945. This is the emblem of the military empire that murdered, tortured, enslaved, raped and terrorized their way through Asia and the Pacific, brutally invading and subjugating entire countries and peoples, while perpetrating innumerable crimes of aggression, crimes against peace, war crimes, and crimes against humanity.

The leaders of the Japanese Military High Command, representing command responsibility for the Japanese military, were ultimately found guilty and hanged for these crimes.

Article R 645-1 of the French Criminal Code, rightly prohibits “the public exhibition or wearing of such insignia, symbols/emblems, uniforms that recall those used by…organizations…or persons found guilty of one or multiple crimes against humanity by…a [competent]…