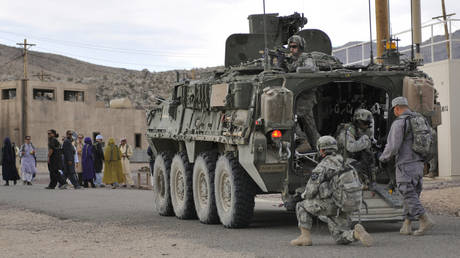 President Donald Trump sees no limits to the miracle of American progress, he told assembled lawmakers during his State of the Union speech, explaining that the only thing that could stand in the way is… the Mueller investigation?

“Foolish wars, politics, and ridiculous partisan investigations” are the only obstacles to the “miracle” of American economic growth, Trump said, to a mixed reaction of enthusiastic applause and bemused looks. “If there is going to be peace and legislation there must not be war and investigation. It just doesn’t work that way.”

One almost expected Trump to get in a dig at the never-ending Mueller investigation, which recently passed the 18-month time limit for a Grand Jury and was given an extension of indeterminate (and likely indefinite) length. But which “foolish war” was the president talking about? Twitter had a few ideas.

‘Foolish wars’. So we are leaving Syria?

“The only thing that can stop are foolish wars”– including trade wars. #CatoSOTU

Some reminded the president that he’d hired a man for whom no war is too foolish.

“the only thing that can stop it are foolish wars”, says the man who literally hired John Bolton

Others held up a mirror to the commander-in-chief…

Would that be
A. Foolish wars against children/poor & persecuted?
B. Ridiculous Investigations into #HerEmails ?
C. @POTUS changing the terms he previously agreed?
D. ALL of the above 🤷🏻‍♀️#DoBetter

“I’m proud that we’ve spent 1.4 TRILLION DOLLARS on our military in the last two years!”

Just about sums it up. #SOTU

“An economic miracle is taking place in the United States and the only thing that can stop it are foolish wars, politics, or ridiculous partisan investigations.” — Donald Trump, SOTU, 2019

…and a few lonely voices called for common sense.

Trump mentioning foolish wars is something that the far left would have LOVED just 3 years ago… tonight, Democrats won’t applaud that… It’s really insane if you think about it. #SOTU#SOTU2019