Activists in Washington, DC are holding day-long vigils on 9/11, calling for police accountability in the shooting death of Terrence Sterling, an unarmed African-American who was killed by police a year ago.

“A year ago, a young man by the name of Terrence Sterling, his life was taken at this very corner,” Sterling’s best friend Steven Douglass told a group of two dozen people holding candles during a vigil early on Monday in Washington, DC. “This morning we come to hold space to hold a vigil, to be [vigilant] and to uplift the family with prayers.”

A call to “Say his name!” was met with a response, “Terrence Sterling!”

Activists plan protests and vigils throughout the day to celebrate Sterling’s life and demand justice for his death.

Sterling, 31, was shot during the early morning hours of September 11, 2016, after police pulled him over for allegedly driving erratically on his motorcycle. Officer Brain Trainer opened fire when Sterling’s motorcycle struck the door of a police cruiser as he was getting out, police said. Trainer claimed he acted in self-defense.

Neither of the officers involved in the stop had his body camera activated. Trainer failed to turn on his camera until after the shooting. Metropolitan DC Police Department said that the cameras should have been activated at the beginning of the pursuit, or at the initial interaction. In 2015, $5 million of DC taxpayer money funded the purchase of 2,500 body cameras. 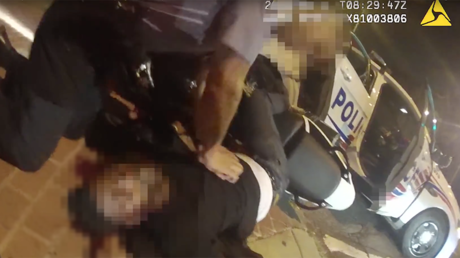 Four days after the shooting, DC police officials implemented a department-wide procedure requiring its officers to acknowledge over the radio that they have turned on their cameras when responding to a call.

Last month, the US Attorney’s Office for the District of Columbia, which handles excessive force allegations involving police officers, decided not to file charges against either of the officers involved in the fatal stop.

Although Trainer will not face criminal charges, DC Mayor Muriel Bowser said the police department had asked him to resign.

“I do not believe there can be real accountability if the officer remains on the force,” Bowser said in a statement in August, according to the Washington Post.

An autopsy showed Sterling’s blood alcohol level was twice the legal limit, and he tested positive for marijuana. It also showed Sterling was shot once in the neck and a second time in the back, according to a $50 million civil lawsuit filed by Sterling’s family against the District and its police department in December 2016.

No DC police officer has ever been charged criminally for a fatal on-duty shooting, according to a city-sponsored 2016 report on the District’s police shootings, titled “The Durability of Police Reform: The Metropolitan Police Department and Use of Force.”

“They may not have indicted the officers  but we are, and we are the people,” Douglass told mourners at the vigil. “There is no government without no people. We’re serving an indictment on everybody this morning. On the chief, the mayor, whoever else is connected to them. If you hold a leadership position you should be held accountable. “

While many people think DC is just the White House and Congress, hundreds of thousands of people live in the city and it has a long history of police brutality going back to the 1900s, said April Goggans, who attended the 7 am vigil at the same spot.

“This is just a continuation of that,” said Goggans. “At every turn this specific case shows a breakdown of all of the systems of law enforcement. From the fact they called the union before they called the ambulance, the fact that these officers continue to be paid after admitting a murder, which is something you or me would ever be able to do.”

“It is not alleged, they have admitted on camera that they have murdered someone and instead of going to jail they continue to be able to work, and if they even leave the force they leave with a severance and a pension. We continue to pay these people’s salaries and that is the same nationwide,” Goggans said.