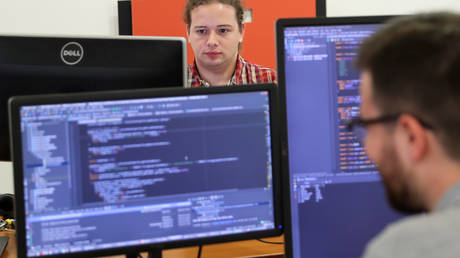 With all of the trolling and abuse that happens daily online, Twitter has revealed some odd priorities when policing its platform, suspending users who jokingly advise jobless journalists that they should “learn to code” instead.

Following recent major layoffs at BuzzFeed and HuffPost, a number of their former employees looking for sympathy online were met with derisive advice to “learn to code” – mirroring the “career advice” offered by journalists during the Obama administration to blue-collar workers who’d lost their jobs.

Hey laid off journalists who are upset that people are telling you to “learn how to code”:

Go mine some coal and then go fuck yourselves. pic.twitter.com/lYWDIIcCKm

It was too much for NBC business reporter Ben Popken – who is still employed, mind you – who on Wednesday reported a user who tweeted the phrase at him, for what he called “abusive behavior.”

A mere twenty minutes later, Popken’s ‘abuser’ was suspended by Twitter. The reporter triumphantly tweeted about his success and advised his fellow journalists not to stay silent if they too found themselves targeted in such a terrible way.

“Learn to code” was tweeted at me by a sketchy account. I reported it as abusive behavior as part of targeted harassment. Twitter suspended the account within 20 minutes.

Journalists if they tweet “learn to code” at you don’t stay silent, take a moment to report it. https://t.co/RXgqqV2ptw

When other Twitter users pointed out that reporting someone for telling him to “learn to code” seemed like a major overreaction, Popken changed his tune, assuring everyone that his feelings were not actually hurt and that he already knows how to code, even posting scans from an old children’s coding magazine to prove it.

Hahah I don’t care and my feelings aren’t hurt if you tweet learn to code at me. I used to enter in QBASIC programs from the back of 3-2-1 contact and wrote a homework keeper on my TI-83. Ahh, memories. Then I got interested in other things.

“Learn to code” is what media types have been glibly telling jobless manufacturing workers for years — jobless media types are now being trolled with the same glib advice, in order to highlight how unfair and condescending it is. Just in case anybody fails to grasp the meme 🙂

Popken wasn’t the first to complain about the phrase, however. In a statement to the conservative website Breitbart last week, Twitter said that repeated use of the phrase “learn to code” directed at journalists amounted to a “targeted harassment campaign” and therefore was against the platform’s rules.

By comparison, it took Twitter two days to remove some – not all! – death threats against the group of boys from the Covington Catholic High School, who were targeted by a hate campaign online after an edited video misleadingly showed them harassing a Native American elder while wearing pro-Trump MAGA hats.


Twitter has been accused in the past of political bias and. in particular, targeting conservatives. Last year, prominent Republican politicians suddenly went missing from search results on the platform – and the phenomenon only affected conservatives, a VICE magazine review found. Months later, Twitter CEO Jack Dorsey admitted that the platform was indeed left-leaning, but said it still operates without bias.


An undercover investigation by right-wing watchdog Project Veritas captured Twitter employees admitting to the bias on camera, however, with one saying that the platform does “shadow ban” accounts it does not like and that the “majority of them” are conservative accounts.

The idea that “learn to code” is now an “far-right meme” is a sign that civilization is crumbling.