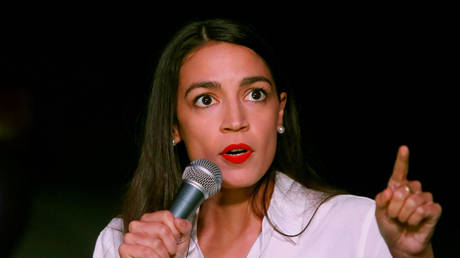 Alexandria Ocasio-Cortez has slammed “disgusting” Conservative media for publishing a fake naked image of her in a stinging rebuke of Republican efforts to smear her. She also took aim at the Daily Mail.

The Daily Caller, owned by Fox News host Tucker Carlson, published what it said was being described as a “nude selfie” of the Democratic congresswoman on Monday.


However, the image in question has been doing the rounds on Reddit for a month, and has already been debunked. The Daily Caller article even acknowledges it’s not the congresswoman in its article.

Ocasio-Cortez responded to the false photo story on Twitter, accusing Republicans of “losing their mind + frothing at the mouth all week,” and said the naked picture hoax was “just a matter of time.”

GOP have been losing their mind + frothing at the mouth all week, so this was just a matter of time.

There is also a Daily Mail reporter (Ruth Styles) going to my boyfriend’s relative’s homes+offering them cash for “stories.”

For those out of the loop, Republicans began to circulate a fake nude photo of me. The @DailyCaller reposted it (!) and refused to indicate it was fake in the title as well.

No wonder they defended Kavanaugh so fiercely.

The nude ‘selfie’ is the latest effort to undermine “America’s favourite commie” Ocasio-Cortez, whose identification as a democratic socialist alarms elements of the Republican party.

A video of her dancing in college, shared in an apparent bid to embarrass her, backfired spectacularly when she became an instant meme and was instead celebrated for being relatable.


Ocasio-Cortez even made a new video of her dancing in Congress, giving her haters a sassy two fingers.

I hear the GOP thinks women dancing are scandalous.

Wait till they find out Congresswomen dance too! 💃🏽

Have a great weekend everyone :) pic.twitter.com/9y6ALOw4F6