Humility in foreign policy “is useful trait,” outgoing President Barack Obama said, adding that America is “an indispensable nation” that has “a lot to be proud of” in the world – thanks to having the most powerful military force.

The assertion came during Obama’s sit in with HBO’s Real Time show host Bill Maher on Friday. The interview was focused on the president’s political legacy and domestic problems, but the commander-in-chief also shared his thoughts on why the US needs a military that costs over $600 billions a year, according to Maher’s count.

“The US having the most powerful military on Earth… helps up check the impulses of some other bad folks,” Obama said, giving North Korean leader Kim Jong-un and his country’s nuclear weapons program as an example.

The Pentagon stages annual military exercises with its ally, South Korea, to prepare for a possible conflict with North Korea. South Korea is the world’s tenth biggest defense spender, investing about $34 billion in its military annually, compared to North Korea’s estimated $10 billion. Pyongyang insists it needs nuclear weapons to deter possible military aggression from the US.

Obama said the US has a natural inclination to intervene globally, though sometimes things go “haywire.”

“Bad things happen around the world and our natural instinct is – we should do something. There are times where our intervention makes a difference, but there are a lot of times where the unintended consequences can result in more problems when we intervene. And sorting out where those issues play out is, I think, one of the biggest challenges that any president has,” he said.

While the president didn’t elaborate on which of his decisions to employ America’s military might had caused unintended consequences, the destruction of Libya in 2011 may come to mind first. NATO’s bombing campaign helped rebels topple the country’s government, and, five years on, Libya is a fractured nation over which competing militant groups, terrorists, and criminals run rampant. In his earlier interviews, Obama said that he regretted not having a plan of action for after the intervention.

Yet Obama said he still believes the US and its military should continue to play a major role in the world.

“As flawed as our foreign policy can be, and whatever blind spots we have, we really are the indispensable nation,” he bragged.

American troops are heavily involved in providing humanitarian relief after natural disasters occur or when diseases break out, Obama explained, mentioning the Ebola virus outbreak of 2014. The Pentagon has infrastructure in place for rapid response and can often act before anyone else. 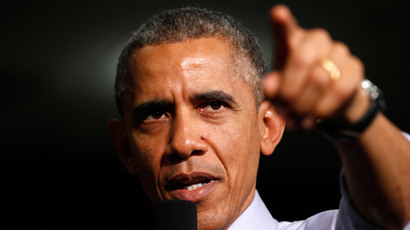 America’s important role goes beyond its military presence, however.

“There is not an international meeting I go to in which, if we were not sitting at the table, nothing gets done. For the most part, other countries don’t have either the capacity or the inclination,” he said.

“When you have a bunch of authoritarian governments out there and a creeping authoritarian impulse around the world, we also are the ones who are pushing back – imperfectly, but most effectively – against locking up journalists and killing human rights activists and making sure that poor people get food and dealing with health crises,” he said.

While Obama didn’t elaborate on how successful America was in pushing back against Turkey’s impulse to arrest journalists or Saudi Arabia’s executions of human rights activists, for example, he insisted that the world needed America’s influence.

“Our values and our ideals actually matter. We do a lot of good around the world. There are some things that we do that are either ineffective or imperfect, but there is a lot to be proud of,” the president said.

The interview came a week ahead of the US presidential election. Before wrapping up, Obama reiterated his call to vote for fellow Democrat Hillary Clinton.