Donald Trump says several other G7 states support the idea of reversing Moscow’s banishment from the exclusive international club, and claims that the previous administration “allowed Russia to take Crimea.”

“We didn’t do votes or anything, but it has been discussed [at the current G7 summit in Canada] Some people like the idea of bringing Russia back in,” the US president said during his final press conference before departing Quebec. 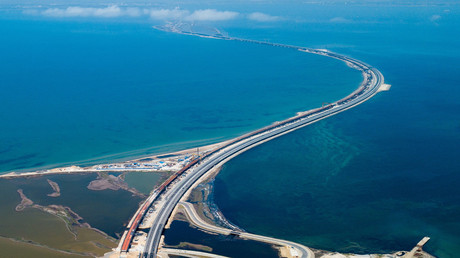 Trump continued by saying that “we are looking for peace in the world, and not to play games” and emphasized his point, stating “the G8 would be better.”

Later, Trump was pressed on whether he recognizes Crimea as a part of Russia, which none of the G7 states currently do.

“Crimea was let go during the Obama administration. He allowed Russia to take Crimea. I might have had a different attitude. But you have to ask that question to President Obama,” Trump said.

Depicting the issue as a question of the past, Trump also noted that Moscow “has spent a lot of money” on the region in the past four years.

READ MORE: Did Trump just fail the G7? RT looks at US leader’s short trip to the summit

Trump’s Russia suggestions, publicly rebuffed, were the focal point of the mood of discord that pervaded the two-day G7 meeting, which some labeled as G6 + 1 with the US standing in its own. From picking a battle with the host country over tariffs during the summit, to arriving late for an official breakfast, and departing early, Trump cut a defiantly combative figure throughout.