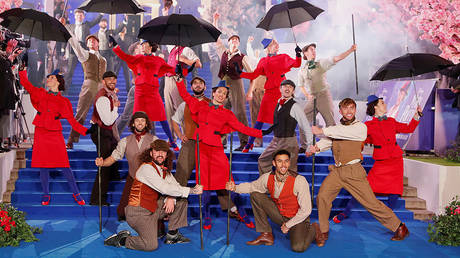 Does the new Mary Poppins film feature blackface? No, but the NYT has nonetheless argued that the movie somehow borrows from racist 1930s minstrel jokes, the latest outrage-laden interpretation of a children’s classic.

‘Mary Poppins Returns’ is an “enjoyably derivative film,” but the story of the vivacious flying governess has a dark, racist side, the New York Times opined. The Gray Lady – known throughout the world for reporting “all the news that’s fit to print”— explained itself thusly: In the 1964 film, Poppins accompanies her young charges, Michael and Jane Banks, up their chimney, resulting in her face getting covered in soot. Instead of cleaning her face, however, the magical nanny powders her nose and cheeks to make them even blacker, then launches into a song and dance routine with Dick Van Dyke.

To be fair, there are racist undertones to the 1964 film (“We’re being attacked by Hottentots!” shouts one of the characters when he sees the soot-covered Poppins and her entourage, using an archaic slur for black South Africans), but does this scene appear in the latest rendition?

No. Instead, the Times is outraged that a verse from one of the film’s many songs mentions a wealthy widow named Hyacinth Macaw – a clear reference to a talking parrot featured in the 1981 version of the Mary Poppins story, which in turn secretly represented a “negro lady” from the original 1934 version! Scandal of the century indeed.


With print revenues tanking across the board, The New York Times and its ilk seemingly regard outrage as currency, and taking a modern lens to hokey children’s classics is a guaranteed source of profit.

Last year, the Association for Library Service to Children dumped an award named after author Laura Ingalls Wilder, whose timeless ‘Little House on the Prairie’ series was apparently peppered with “anti-Native and anti-Black sentiments.” Likewise, Mark Twain’s ‘Adventures of Tom Sawyer’ and Harriet Beecher’s ‘Uncle Tom’s Cabin’ have both come under the hammer for their (period-typical) descriptions of black people.

In fairness, these books could actually be read as racially insensitive, unlike 2019’s Mary Poppins. But the media has picked even more ridiculous battlefields to fight the culture war on. Whether it was the Weather Channel reporter calling a snowman a “snowperson,” or a Slate columnist demanding Santa Claus be stripped of his white, masculine identity and replaced with a gender-neutral penguin, journalists have always been at the forefront of the social justice movement.

On Twitter, commentators ridiculed the New York Times’ latest effort. “I didn’t know the NY Times did parody articles now. Cool,” said one. “I suppose it’s too much to hope this is satire,” another said. “The world has gone mad.”

I suppose it’s too much to hope this is satire. The world has gone mad.

You could argue that the scene in question was mocking the idiotic attitudes towards black people in the Edwardian Era, but of course, there’s no room for nuance in 2019. The Mary Poppins film was shamefully racist. https://t.co/wAgOXv71b2

But the line between satire and reality is even more blurred than you’d think. Turns out, the New York Times’ article made almost the exact same point as a tweet by transparently satirical social-justice account Titania McGrath last year. In the original tweet, ‘McGrath’ used the same photo as the New York Times to mockingly call out Hollywood’s lack of racial diversity.

So I tweeted this back in September, and got attacked for calling out Mary Poppins.

And only *now* the press are reporting on it.

I am like Cassandra, screaming truth into the deaf ears of humankind. pic.twitter.com/V4V92FmzQD

Parroting satire accounts is a new one for the New York Times, but its writers better watch out. According to its own interpretation of Mary Poppins, parrots are racist.