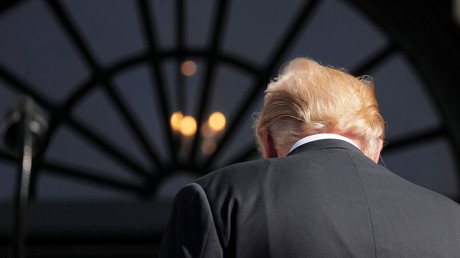 It is the year 2020 and Donald Trump has just lost his bid for reelection for president of the United States — at least in the mind of one New York Times scribe, who has envisioned a Trumpless future in his latest column.

Columnist David Leonhardt has penned an article billed as a “sneak peek” at analysis from November 4, 2020 — the day the he imagines that Trump will fail to be reelected as president for a second term. Headlined “How Trump Lost Re-election in 2020,” it begins with Leonhardt taking a look back at the “historically unpopular president” who presided over a period of “deep national anxiety” and lost to Senator Elizabeth Warren (D-Massachusetts).

The article comes in response to a similar piece written by Leonhart’s colleague Bret Stephens last week, which imagines the morning after Trump defeats Warren and wins re-election — because apparently futuristic reporting is a thing now.

I believe I just woke up my neighbors laughing so loud. What a JOKE of an article

Once I got to “President-Elect Warren” I stopped reading.

The fantasy column, which some on Twitter described as political “fan fiction” or plain old “fake news” from the Times, delves into all the reasons why Leonhardt imagines Trump will lose. The author also predicts a seething tweetstorm from an angry Trump after Warren’s imagined victory.

Leonhardt also rehashes the “extraordinary nature of the circumstances” which propelled Trump into the presidency in the first place, listing off the various excuses proffered by the Democrats to explain his win in 2016, including “help from Russia” and the “involvement” of former FBI director James Comey. In the futuristic column, Comey has also nabbed himself a job as the host of a talk show on ABC.

In this version of the future, Trump still wins roughly 90 percent of the Republican vote, but that was “not nearly enough” to stop Warren from sweeping to victory on the back of anger that Trump failed to live up to his 2016 campaign promises.

While some were happy to escape to a future date at which Trump no longer dominates US politics, others were more amused and annoyed by the hypothesizing from Leonhardt, who usually sticks to analysis from the present and not the future, with some branding his efforts “delusional” and “pointless.”

Some Trump supporters also suggested that the spiel would be funny to re-read in 2020 if things don’t go exactly as Leonhardt imagines.

You do realize this will come back to haunt you. Same file as Trump will never be President. 😂

You’re way off base my friend. DJT’s support is greater then ever. He will be re-elected in 2020. I’m gonna keep your article on hand to rub it in your face. Why don’t you be fair and write about why he will be re- elected. #FakeNews